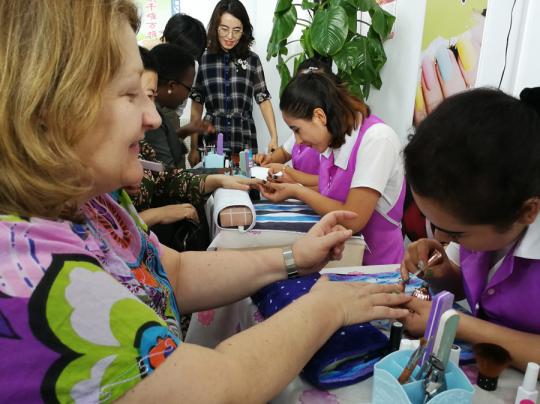 Members of a delegation of UN envoys get manicures at a vocational school in Hotan, Xinjiang Uygur autonomous region, on Aug 30, 2019. (Photo/Xinhua)

Most trainees in the Xinjiang Uygur autonomous region's vocational training centers have graduated. Many have found employment, improved their quality of life and now live happy lives, according to the region's Committee of the Chinese People's Political Consultative Conference on Wednesday.

In recent years, Xinjiang has set up the centers to teach the standard Chinese language, about the law and vocational skills to people who harbor extremist thoughts. Their personal freedom, ethnic and cultural traditions, and human rights have been fully respected and protected, said the committee in a statement that condemned the passage of a Xinjiang-related act by the United States House of Representatives.

Many of the centers' trainees found employment with the vocational skills they learned and others have set up their own businesses, Shohrat Zakir, chairman of the regional government, told Xinjiang Daily on Tuesday.

Shohrat mentioned Shatar Zunen, a graduate of a center in Turpan, who, after watching terrorism-related videos, had been determined to carry out jihad-holy war-in order to go to heaven. He also asked others to act against "nonbelievers".

After studying at the center, Shatar has found new direction in life and regained confidence to move forward. With the cooking skills he learned at the center, he is now running a restaurant with his wife and can earn an annual income of about 100,000 yuan ($14,170).

According to the regional government, opening the education centers is in accordance with the Anti-Terrorism Law and the region's de-extremization regulations in order to root out terrorism and extremism.

The vocational training centers are schools that impart knowledge and skills in accordance with the law and safeguard the vital interests of ethnic groups. There are no "illegal detentions", "concentration camps", "violations of human rights" or "ethnic oppression", as charged by the US, the regional government said in a statement on Wednesday.

"Xinjiang's vocational education and training program is in accordance with the fundamental interests of the people of all ethnic groups and is completely right," it added.

Shohrat said many of the centers' trainees had participated in terroristic or extremist activities in circumstances that were not serious enough to constitute a crime, posed no real danger or did not cause actual harm.

The centers are no different from open schools and provide professional teachers, legal practitioners and senior technicians to help raise students' awareness of the rule of law, practical skills and use of standard Chinese.

The centers have medical clinics, sports venues, libraries, computer rooms, auditoriums and stages for traditional dancing and singing, and the dormitories are equipped with radios, TVs and air conditioning.

Any form of abuse of trainees is strictly prohibited and their freedom of religious belief is fully protected. They can freely attend legal religious activities when they go home, he said.

Since December 2018, more than 1,000 people from over 90 countries, including 71 United Nations officials, foreign envoys in China, media and religious groups have visited the centers in Xinjiang, according to Shohrat, and they generally said that the conditions they saw in Xinjiang were completely different from what some Western media and politicians described.

"The centers have been proven to be an effective measure in preventing terrorism and extremism. Without the centers, the social situation in Xinjiang wouldn't be as stable as it is now," Shohrat said, adding that Xinjiang has been free of terrorist incidents for three years.