2022 preparations peak in mountains of Yanqing 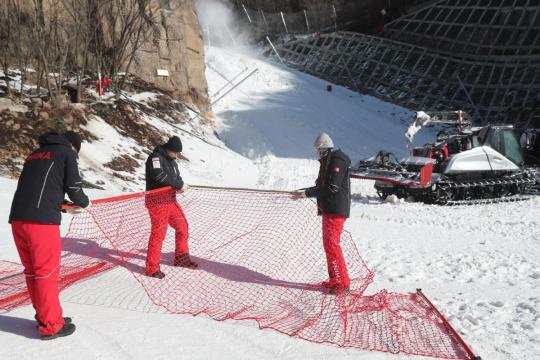 Protective netting is laid on Xiaohaituo Mountain in northwest Beijing's Yanqing district on Thursday. Construction of the National Alpine Ski Center continues in the area, with the 2022 Olympics venue set to stage an FIS World Cup meet in February. (WANG JING/CHINA DAILY)

Despite strong winds and a bitter winter chill, the construction site of the National Alpine Ski Center is bustling with workers and machinery busy grooming snow trails that wind down Xiaohaituo Mountain in northwest Beijing's Yanqing district.

In just two months' time, the resort, nestling in forest at over 1,200 meters above sea level, will make its debut by hosting an International Ski Federation (FIS) Alpine Ski World Cup meet from Feb 15-16. Crucially, the event will serve as an early test run for the 2022 Beijing Winter Olympics.

The venue, China's first Olympic-standard Alpine resort boasting a vertical drop of 900 meters, will have seven ski runs measuring 10 kilometers in total by 2022, providing tracks for 11 disciplines-including downhill, giant slalom and Super G-which have never before been staged in China.

A massive development operation, which has mobilized 117 snow-making machines and 19 snowcats (or snow groomers), progresses day and night. Organizers estimate that 260,000 cubic meters of man-made snow will have been produced by the end of this month, with track grooming to commence early next year.

"The preparatory work for the World Cup event is well underway and will be completed ahead of time for pre-race tests and installation of ancillary facilities in January," said Liu Qianxun, secretary-general of venue operation of the World Cup event's local organizing committee.

"To prepare for an Alpine ski race at World Cup level, which has never been done before in our country, provides a steep learning curve for all of us to understand the complexity of work organizing such a highly technical event," said Liu, who is also an official with the Beijing 2022 Winter Olympics organizing committee.

The Yanqing leg of the FIS World Cup series, the first of 15 official test events for the 2022 Games, has attracted 111 skiers from 19 countries to compete in men's downhill and Super G.

One of the fastest Winter Olympic events, Alpine skiers can reach speeds of up to 140 kph on hair-raising courses with gradients as steep as 70 degrees.

Still a novice in the Western-dominated event, no Chinese skiers have qualified for the World Cup meet, but the host is hopeful the new Yanqing center can be a breeding ground for new talent.

"After the Cup meet, the center will help our own athletes improve their skills and boost their resolve through training runs on the Olympic slopes," said Liu.

As one of three venue zones for the 2022 Games, the mountain cluster in Yanqing will be linked to downtown Beijing and co-host city Zhangjiakou in Hebei province via a new high-speed railway, which is scheduled to open in a month.

Generally speaking, progress has been smooth in Yanqing, but the sophisticated nature of Alpine course preparation has meant organizers have had to lean on an experienced team of 85 foreign experts, led by Russian Nikolay Belokrinkin, who are working on site in areas ranging from snow-making to in-competition course maintenance.

Li Junjie, a local snowcat operator who participated in a 15-day training program in New Zealand in August, said the foreign expertise is invaluable.

"They helped shed light on the complexity of the job," said the 35-year-old, who has previously worked at Thaiwoo Ski Resort in Zhangjiakou.

"Despite the lack of natural snowfall in Yanqing, the Alpine courses require the use of densely packed artificial snow that can generate equal levels of speed and consistency for each skier. We had no clue about this before."

Owner Beijing Enterprises Group (BG) envisages that the new Alpine center will develop into a major sports and tourism hub beyond 2022.

According to the district government, 49 start-up companies operating in sectors such as winter sports training, equipment manufacturing and tourism had moved into a new industrial park in Yanqing by early November, while over 10,000 beds at hotels and homestays will accommodate visitors leading up to 2022.

The district now has six primary and middle schools recognized as "national level" pilot institutions offering compulsory physical education classes in winter sports, and since 2014 has organized a junior skiing program that trains up to 3,000 students annually at two resorts.