Li: Country to further level playing field for all firms 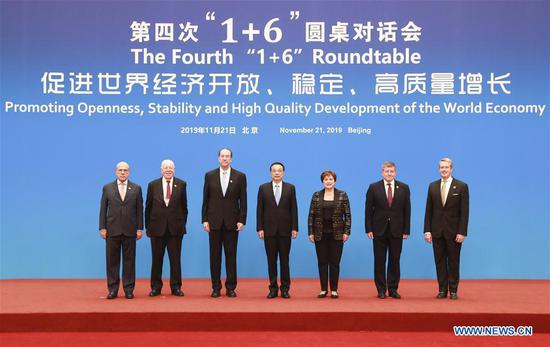 Premier Li Keqiang and heads of six major international economic organizations pose for photos at the Fourth "1+6" Roundtable in Beijing on Thursday.

China will maintain the stability and consistency of its macroeconomic policy next year and continue with a proactive fiscal policy and prudent monetary policy to stabilize market expectations, Premier Li Keqiang said on Thursday.

Speaking at the Fourth "1+6" Roundtable in Beijing, the premier ruled out the possibility of resorting to a deluge of strong stimulus policies or monetary easing to shore up growth.

Instead, he highlighted the importance of making fiscal policies more effective and investments more sustainable and forward-looking.

Li pledged to make monetary policy better suited to the development of the real economy, especially small and medium-sized enterprises and microbusinesses — key pillars of the job market.

"We must take multiple measures to reduce the actual interest rate and enable the Chinese economy to continue to support relatively full employment," he said in a news briefing after the talks.

The discussions were held between Li and heads of six major international economic organizations, including the World Bank, the International Monetary Fund and the World Trade Organization.

The global economic slowdown has inevitably affected China, which is now an open economy, and it is even more difficult to ensure stable economic performance, he said.

However, the premier voiced confidence in attaining the economic and social development goals for this year and maintaining major economic indicators within an appropriate range. Li underscored the importance of unleashing the potential of domestic consumption and adopting more steps to open up the manufacturing and service sector.

More measures will be adopted to bring the business environment in line with market principles, the rule of law and international standards, and efforts will be made to level the playing field for all businesses registered in China, he said.

"We will ensure their equal access to opportunities and resources and that they receive equal legal protection. We will further widen market access, make oversight more impartial and withstand downward pressure through energizing market entities," Li added.

He said the economic slowdown has disrupted the global value chain and the division of labor. With significant slowdowns in global economic growth and rising protectionism, no country is immune and joint efforts from all sides are required, Li added.

World Bank President David Malpass said that China has adopted structural reforms that can have the potential for big upside gains for its people as they engage more fully in domestic and global markets.

However, Malpass cited challenges faced by the Chinese economy such as growing debt and structural constraints that require new drivers of growth, especially during this period of slower global growth and recession in parts of Europe.

"To avert a sharper slowdown, it's essential to resolve bilateral trade relationships, and also to improve the quality and transparency of China's lending," he said.

Kristalina Georgieva, managing director of the IMF, said global economic growth is projected to be only 3 percent in 2019, the slowest rate in a decade.

She said the IMF projected China's growth to slow to below 6 percent in 2020, a reflection of the global slowdown and a natural trend as China transitions from high-speed to high-quality growth with the economy evolving from manufacturing and investment-led growth to one driven by consumption and services.