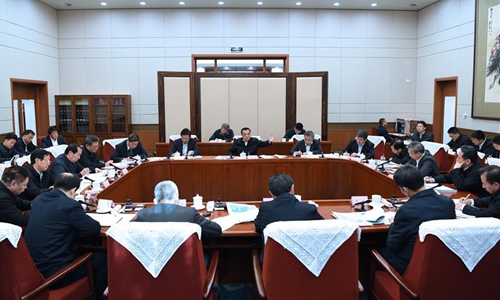 Chinese Premier Li Keqiang, also a member of the Standing Committee of the Political Bureau of the Communist Party of China Central Committee, presides over a work meeting on follow-up efforts in the south-to-north water diversion project in Beijing, capital of China, Nov. 18, 2019. (Xinhua/Rao Aimin)

Li, a member of the Standing Committee of the Political Bureau of the Communist Party of China Central Committee, made the remarks while presiding over a work meeting on follow-up efforts in the south-to-north water diversion project.

Since its completion, the first phase of the eastern and middle routes of the project has played an important role in supporting water use in areas along the routes, benefiting over 100 million people, Li noted.

However, water shortages and the uneven distribution of water across regions remain key constraints to economic and social development, he said, adding that water shortages are especially severe in the country's northern and northwestern regions.

Li urged authorities to plan and push the water diversion project with a historical perspective and a holistic view, which would help counter downward pressure on the economy, promote effective investment, stabilize growth and create jobs.

Officials should improve implementation plans according to the overall planning of the project and push the follow-up construction of the eastern and middle routes at an appropriate time, Li said.

Efforts should be made to conserve water and ensure project quality, Li said, adding that the comparison and selection of plans for the western route of the project should be carried out.

Acknowledging the great demand for water conservation projects, Li said the construction of such projects and their supporting facilities should be a focus to increase the effectiveness of investment.

While putting project quality first, Li also urged relevant departments and local governments to take advantage of the relatively low prices of raw materials to speed up the construction of ongoing projects.

Li also underscored the importance of using innovative ways to increase financing for the follow-up work of the south-to-north water diversion project and other major water conservation projects, calling for policy incentives to encourage financial institutions to issue mid- and long-term loans to support such projects.