Police warning of live ammo use is only right and proper 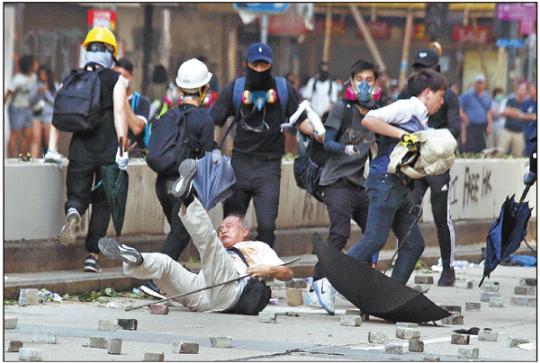 Rioters beat a Hong Kong resident to the ground in a street that they blocked in the city on Monday. (Photo/China Daily)

Many Hong Kong people think they have experienced the darkest days in the five-month protest, after the serious clashes that took place in the Chinese University of Hong Kong between protesters and police; a policeman shot a protester who was trying to capture the gun; and protesters set a man on fire and killed a cleaner with a brick.

Even after that, on November 17, some protesters have again made a university as the battlefield. In the evening, protesters burned down the overpass near the Hong Kong Polytechnic University (PolyU) and used a firebomb to destroy a police Unimog vehicle. Earlier this day, protesters have used lethal weapons to attack the police: a police officer from the Force Media Liaison Cadre was shot with an arrow in his calf, and another policeman was hit by marble on his mask. Without protection, they could have been severely injured.

Faced with lethal weapons and violent attacks, Hong Kong police have warned that they would fire live ammunition if they continue the attack.

The police insist though that they would use minimal force and would only fire live ammo under critical threat and without any other choice. To anyone who has experienced the horror initiated by some rioters and witnessed how they would use petrol bombs to attack the police, this warning is valid and proper.

Violent protesters are not satisfied with disrupting the public order anymore. At the end of September, the police have already warned that extreme protesters are moving "one step closer to terrorism." Now, it seems like that thin line was crossed and some actions of the rioters can already be classified as a terror attack: they are targeting individuals who dare to speak against them and even have the intention of killing the police. Even so, some people have quickly accused the police's warnings of "murder" and appeal to international observers to stop the "oppression" of Hong Kong police.

In the meantime, the Police General Orders also specifies that under three circumstances can police officers open fire: to protect people, including themselves, from death or severe injury; to effect the arrest of anyone who has just committed a violent crime; or to quell a riot or insurrection.

When petrol bombs, arrows, and cars are used in clashes with the police, it is reasonable for police to use that last resort to protect themselves. According to Kennedy Wong Ying-ho, Convenor of Safeguard Hong Kong Alliance, compared with other countries, regulations on the use of firearms in Hong Kong are relatively more strict. The police shooting on the 11th could be seen as an example. His shot follows the principles of the use of firearms: warning before opening the fire, necessary and minimal force, and an immediate stop after the shooting.

As Lawrence Ma, barrister and chairman of the Hong Kong Legal Exchange Foundation, points out, Hong Kong police are asked to protect themselves to help others during their daily training, which includes the protection of the deadly weapons they carry. If captured by the protesters, the gun would not only threaten the police officer's life but also put Hong Kong citizens in danger.

If the unrest is to continue, Hong Kong needs a determined police force to protect the public interest and citizen lives, not a police group who cannot defend themselves in the face of intense raids by the rioters. Hopefully, the warning is strong enough to deter some violent protesters from stopping their riots and urge them to resume the path of rationality.

The author is Zhao Yuanzhen, an opinion editor with CGTN Digital. The article reflects the author's opinion, and not necessarily the views of CGTN.