Opportunity is the buzzword for owners of small to medium-sized companies attending the second China International Import Expo in Shanghai this week.

Held from Tuesday to Sunday, the expo has hosted over 3,000 foreign companies displaying countless products and services to the tens of thousands professional buyers from across the country.

Arthur Millen, a Brazilian confectioner, exports biscuits and candies to 15 countries, but not to China yet.

"It's my first time in China, but I see this is a big opportunity for us to start business here, and I am looking for a local partner," he said to Wang Guanxing, an owner of a trading company from Henan province.

"I am the one you are looking for," Wang replied. "We own eight supermarkets and have cooperation with more than 80 companies in China. We sell products from many countries involved in the Belt and Road Initiative."

After a few rounds of discussion, Millen and Wang signed a memorandum of understanding on their intention of cooperation. This was just one of more than 1,000 of meetings put together by the matchmaking sessions organized by Bank of China during the expo.

"I have participated in many exhibitions, but this one is different. I have met and exchanged cards with more than 200 customers, and we have received many inquires, which is far more than my previous experience in other exhibitions," said Millen, who has a small booth for his company Cory in the food section of the exhibition.

"Because of the distance, I didn't know much about China. Now I come to Shanghai, experience the culture, get to know the market and see people. I realize it is not a closed country, but rather an open one," he said. "I will be back to China for next year's expo." 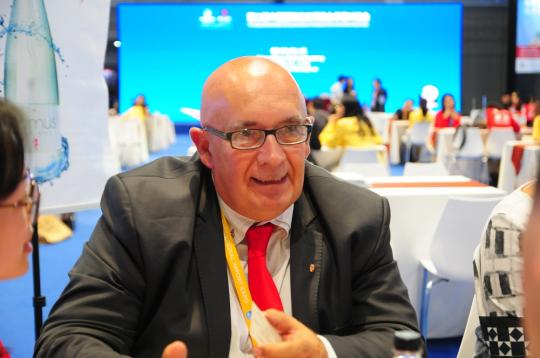 Laszlo Regoczi is a second-time exhibitor at the CIIE. The CEO of the Hungarian mineral water producer Primus Natural signed a contract with a company in Jiangsu province last year and sold a container of bottled water to China.

"We exchanged all the necessary documents at last year's CIIE, and then we followed up with each other to execute the agreement and went through all the export process," he said. "The first transaction is very important, and after that we have good connection and we can extend to different areas."

"This year, we have come to strengthen our connection with the old friends, and also make new friends," said Regoczi, adding that he has signed a contract with another Chinese company to be his agent to sell the mineral water to the Middle East.

"To be open, to understand each other, and to be flexible, this is my suggestions for people who want to do business in China," he said. "And one more suggestion — bring your family."

Laszlo brought his wife and his 7-year-old son with him to the expo last year. "He is very happy to be here again. He likes China very much, and I think we will come next year," he said. 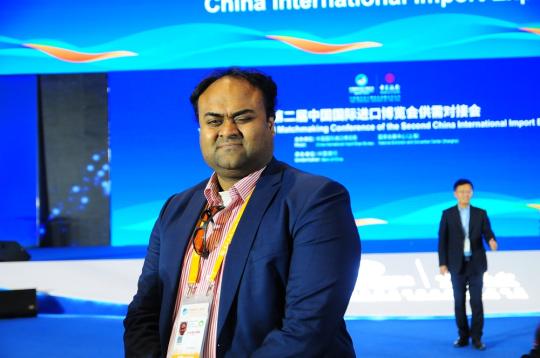 Widjat Jipat, the vice president of Blue Sarefa, a company selling chocolate in the Netherlands. [Photo by Xing Yi/China Daily]

Widjai Jipat is new to the CIIE but his products have come the second time.

"My Chinese friend introduced my products to the expo last year, and he came back with so many inquiries," Jipat said. "He told me that I have to come this year."

Jipat has been preparing and communicating with his Chinese clients since then.

During the past week, Jipat have met around 20 potential Chinese clients. "They are all very big companies and we are going to have further meetings with their bosses to see how can we proceed the business," he said.

Jipat has two booths in the exhibition, one in the food sector and another in the home appliance and consumer product sector.

"We are already planning to come next year, and we are going to take bigger booths," he said. 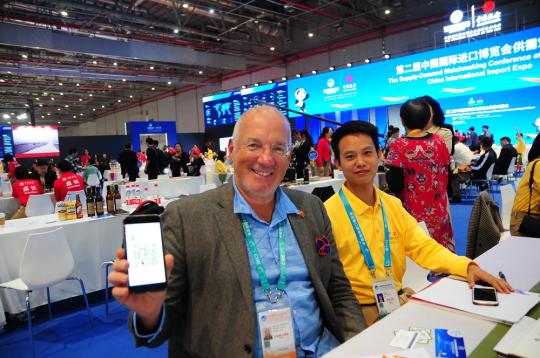 Mladen Djurovic heard about the CIIE from the Chamber of Commerce in Serbia. The organic fruit seller installed a WeChat app in his phone the first day when he attended the expo.

"I was told Chinese people use WeChat to communicate a lot," said Djurovic, who has been doing business for 35 years, exporting organic food such as berries, apricot, and cherry within the Europe and to the United States and Canada. "The experience I had here gives me a lot of hope. I look in supermarkets here in Shanghai and see there is a room for my products."

Djurovic has met around 20 potential clients in the past week and added them on WeChat to keep in touch.

"This time, I am just testing the water. I came over here to understand how it looks like — and found this is a huge city, a huge expo and huge market," he said.

"I hope next year I will come here with some employees, and we shall be much better prepared, bring samples and arrange meetings beforehand."