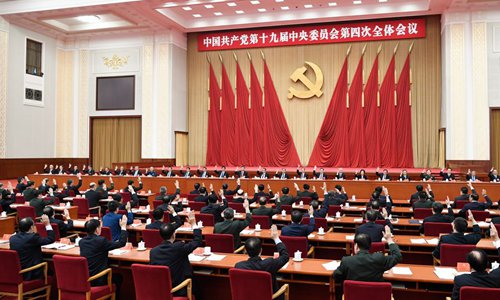 The Political Bureau of the Communist Party of China (CPC) Central Committee presides over the fourth plenary session of the 19th CPC Central Committee in Beijing, capital of China. The session was held from Oct. 28 to 31, 2019. (Xinhua/Shen Hong)

Upholding and improving the system of socialism with Chinese characteristics and advancing the modernization of China's system and capacity for governance is a major task for China to deliver on the two centenary goals, according to Xi Jinping, general secretary of the Communist Party of China (CPC) Central Committee.

Xi said it has always been the Party's grand goal to build a modern socialist country and realize the rejuvenation of the Chinese nation.

Since its founding, the Party has been leading the Chinese people to unremittingly struggle for the goal, he added.

With deepening reform and opening up, the Party has a stronger appreciation of institution building, Xi said, adding that the 15th, 16th and 17th CPC national congresses all put forward clear requirements on the subject.