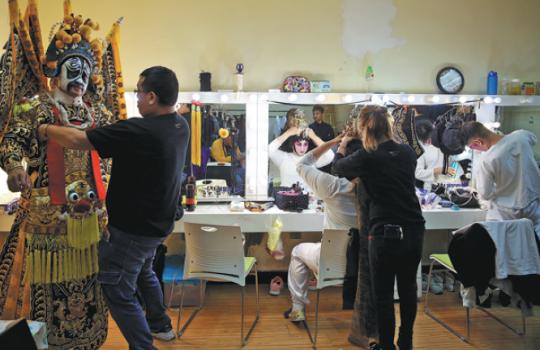 Actors prepare for a performance of Farewell My Concubine in Beijing last month.(PHOTOS BY ZOU HONG / CHINA DAILY)

Two friends met up after work late last month in Beijing before heading off to a live show. This was no pop concert or star-studded musical, but a Cantonese Opera performance of Farewell My Concubine staged at Star Theaters, one of the smallest such venues in the city.

"We bought the tickets right after the show was announced in case it sold out," said Meng Ying, 27, who works for a financial company based in the capital.

In 2017, she watched a performance of Farewell My Concubine when it was first staged in Beijing, and was fascinated by both the atmosphere in the small theater and by Cantonese Opera, an art form she was not familiar with. She recommended it to her friend, who joined her for the show after work on Oct 30.

"Although we don't speak Cantonese, we could understand the lyrics through subtitles displayed at the back of the stage," Meng said. "The storyline was clear and easy to take in. It was a totally different experience from big-budget shows at large theaters."

Small theaters have become trendy venues for young people in urban areas who are looking for a taste of traditional Chinese opera with a contemporary twist — from the method of storytelling to the music, stage design and costumes.

For artists striving to popularize the art form among younger generation, these venues offer a platform to experiment with new technology, explore the psychological portrayal of characters and enhance young people's appreciation of Chinese operatic genres.

Last month's staging of Farewell My Concubine, featuring actors based in Hong Kong, including Keith Lai as Xiang Yu and Janet Wong as Yu Ji, was adapted from the classic Chinese story set against the backdrop of conflict between the Han and the Chu, major contending powers in the latter years of the Qin Dynasty (221206 BC).

Combining traditional Cantonese Opera techniques and contemporary stage and lighting design, the show took shape in 2016 and was previously staged in Beijing in 2017 and last year.

Meng became familiar with the classic story after watching the eponymous 1993 movie, directed by Chen Kaige and starring Leslie Cheung, Zhang Fengyi and Gong Li, which won the Palme d'Or at the Cannes Film Festival and was nominated for an Oscar.