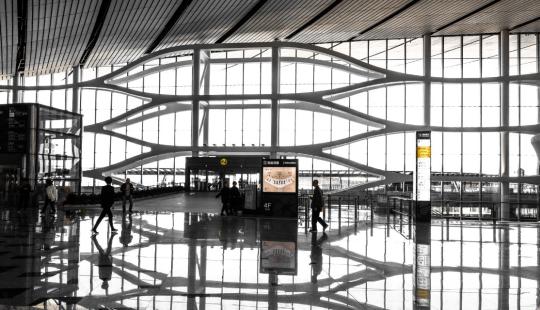 Passengers walk to the boarding gates at the departure hall of the new Beijing Daxing International Airport. (Photo by Ma Gelin/For China Daily)

Domestic and foreign carriers operating at the new Beijing Daxing International Airport have expressed confidence that the added capacity and better facilities would strengthen their growth prospects in the country.

Nordic carrier Finnair launched its first flight from Helsinki to Daxing airport on Nov 3, and the number of passengers who took the flight beat its expectations. This week, Finnair added three weekly flights connecting Helsinki and Daxing during the winter.

The new flights are in addition to the daily flights between Helsinki and Beijing Capital International Airport, taking the total to 10 weekly frequencies, according to the airline.

"Our expectations of the new route is high. It gives us more capacity to Beijing. The two hubs complement each other well and present more opportunities for Finnair to boost sustainable growth in China," said Mikko Turtiainen, vice-president of global sales at Finnair.

"China has long been one of the most important global markets for Finnair. I have a strong confidence in the demand and growth potential of this highly competitive market," he said.

Earlier, Finnair was the first foreign airline to announce operations at Daxing airport. With a strong commitment and over 30 years of operations in China, Finnair has launched direct flights that connect Helsinki and Beijing, Shanghai, Xi'an, Guangzhou, Nanjing and Hong Kong. It also offers Alipay mobile payment and Wi-Fi connectivity on-board, the carrier said.

From Oct 27 to March 28, the winter-spring flying season for the aviation industry in China of 2019-20, 15 domestic and foreign airlines will operate their flights at Daxing airport, and a total of 116 routes, including 15 new international routes, will be launched during the season.

"British Airways is hugely proud to be the first international airline to fly into Beijing Daxing. This stunning and innovative new airport and the world-class customer experience it provides will play an important part in our strategy to increase travel between China, the United Kingdom and beyond," said Noella Ferns, British Airways' executive vice-president in China and the Philippines.

"With its less than optimal location and immature surrounding facilities and transportation, most business travelers will still prefer to take flights from the capital airport. The new airport will attract some leisure travelers with its flight ticket price advantages. In the short term, this might have certain impact on the profit-making of carriers," said Lin Zhijie, an aviation industry analyst.