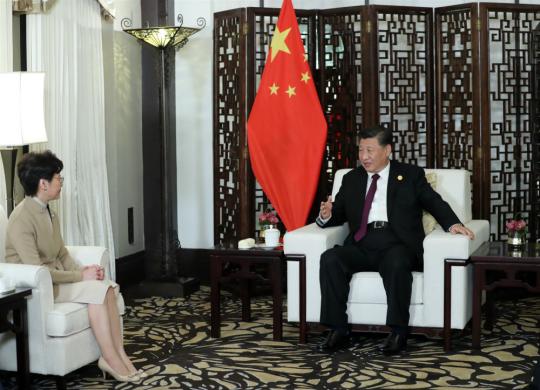 After hearing Lam's report on the recent situation in Hong Kong, Xi, noting that the disturbances in Hong Kong have lasted five months, said Lam has led the SAR government to fully discharge its duties, strive to stabilize the situation and improve the social atmosphere, and has done a lot of hard work.

Xi voiced the central government's high degree of trust in Lam and full acknowledgment of the work of her and her governance team.

Ending violence and chaos and restoring order remain the most important tasks for Hong Kong at present, he said.

Xi demanded unswerving efforts to stop and punish violent activities in accordance with the law to safeguard the well-being of the general public in Hong Kong.

Meanwhile, effective efforts should be made in work including engaging in dialogue with all sectors of society and improving people's livelihoods, Xi said.

He expressed his hope that people from all walks of life in Hong Kong fully and faithfully implement the principle of "one country, two systems" and the HKSAR Basic Law, and make concerted efforts to safeguard Hong Kong's prosperity and stability.

Briefing the media on the sidelines of the expo, Lam expressed her will to end violence in Hong Kong after Xi reaffirmed support for her.

Lam vowed that she and her administration will continue to work in strict accordance with the "one country two systems" principle, uphold the rule of law and try to put an end to the violence.

Chief Secretary for Administration Matthew Cheung Kin-chung said Xi's remarks are "a shot in the arm" for the Hong Kong government to end violence and restore social order. He made the remarks before the weekly Executive Council meeting on Tuesday as acting CE during Lam's visit on the mainland.

Describing the meeting as "a vote of confidence", Cheung said it showed that Xi attached high importance to Hong Kong. "All this is particularly reassuring to us," he said.

Cheung added that the meeting helped the SAR government find a clear direction for accomplishing future tasks such as strengthening communication with the public and addressing deep-seated social problems.

The official noted that a second open community dialogue would be held after the District Council elections. In the meantime, the government will continue to hold closed-door focus group meetings to better gauge public opinion, he said.

He also noted the government will soon roll out another set of relief measures for the troubled catering, retail and logistics sectors to help them endure the technical recession the city is facing.

The recognition from the central government was also hailed by local political and business leaders as timely support for the embattled SAR government.

Veteran politician Tam Yiu-chung, Hong Kong's deputy to the National People's Congress Standing Committee, said Xi's recognition of Lam would help stabilize the situation as it crushed rumors about a reshuffling of the SAR leadership.

A recent report by The Financial Times claimed that Beijing is seeking to replace Lam by March. Speculation has also surfaced recently that some SAR officials and Executive Council members providing advice to Lam may also be replaced.

Amid the ongoing anti-government protests, the government has met with unprecedented challenges brought by local rioters, opposition camps and external forces, said Lau, who is also vice-president of the Chinese Association of Hong Kong and Macao Studies.

The support from the central authorities is much-needed for the SAR government to end violence and restore social order, a challenging task during the severe time, Lau said.

In effectively stopping violence and restoring law and order, the SAR government needs to be tough enough, and actively mobilize manpower from functional departments, Wong said.

But in terms of dialogue with the community, and improving the city's deep-rooted livelihood issues, it requires prolonged efforts with a mild approach, he added.

Luis Liu contributed to this story.