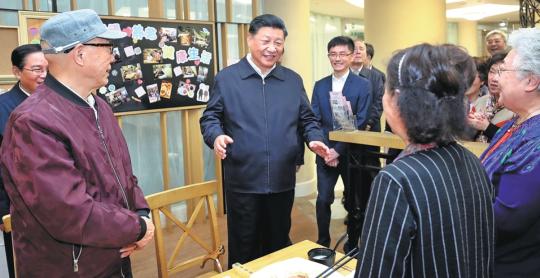 President Xi Jinping talks with Shanghai residents at a community center in the city's Changning district during an inspection tour on Saturday. (JU PENG / XINHUA)

President Xi Jinping, on a two-day inspection tour in Shanghai, called for further reform, opening-up and institutional innovation to improve the level of governance of the international metropolitan city.

Xi, also general secretary of the Communist Party of China Central Committee and chairman of the Central Military Commission, spoke at a meeting attended by local officials on Sunday, the last day of his tour.

He urged accelerated efforts to achieve overall high-level opening-up in the Shanghai Pilot Free Trade Zone to make it a significant base from which talented people, both at home and abroad, can develop internationally integrated innovation. He added that it should be an important hub for synergies between onshore and offshore business development, as well as an experimental field for international economic governance.

Maintaining focus is needed to advance the science and technology innovation board on the Shanghai Stock Exchange, as is experimenting with a registration system for listed companies, Xi said. He added that efforts should be made to improve the quality of listed companies and to strengthen supervisory measures.

The president stressed that Shanghai should exert itself to serve the Yangtze River Economic Belt and play a leading role in promoting the integration of the Yangtze River Delta by focusing on major projects and platforms in key area.

Xi called on Shanghai to improve its economic productivity, optimize the allocation of global resources and achieve major breakthroughs in key technologies, making innovation a strong driver of high-quality development.

He urged efforts to raise the level of internationalization in Shanghai's financial markets by leveraging the Belt and Road Initiative.

He also called for the enhancement of innovation in social governance to address major public concerns that involve the immediate interests of the people. They should have a stronger sense of fulfillment, happiness and security, he said.

During his inspection tour in one of the nation's major economic hubs, Xi visited Yangshupu Waterworks in the Yangpu Binjiang public space and a community center in Changning district to learn about the planning and construction of urban public spaces, as well as community governance and services.

When he arrived at the community center on Saturday afternoon, residents there were discussing a draft bill. Learning of the discussion, Xi told the residents that China pursues a socialist path of political development with Chinese characteristics, and that all major legislative decisions in the country are based on legal procedures, democratic discussions and scientific and democratic decision-making.

He expressed hope that they would continue to make contributions.

During his visit to the Yangshupu water plant, Xi heard about the planning and construction of urban public spaces. He said a people's city is built by the people and for the people, so a people-centered development philosophy must be upheld in urban construction.

He called for expansion and improvement of the city's public spaces to include reasonable arrangements for production, living and ecological purposes so that people can have space for leisure, fitness and entertainment, thereby fostering a stronger sense of gain and happiness that makes the city a happy paradise.

The tour came in the wake of the Fourth Plenary Session of the 19th CPC Central Committee, which outlined decisions on major issues involving how to uphold and improve the system of socialism with Chinese characteristics.

President Xi Jinping talks with Shanghai residents at a community center in the city's Changning district during an inspection tour on Saturday.