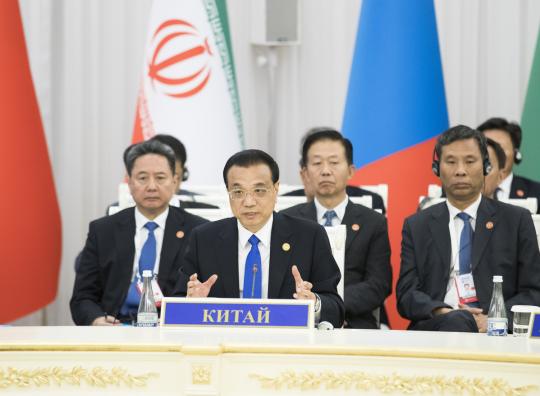 Premier Li Keqiang attends the 18th meeting of the Council of Heads of Government of Member States of the Shanghai Cooperation Organization (SCO) in Tashkent, Uzbekistan on Nov 2, 2019. (Photo/Xinhua)

Premier Li Keqiang called on Saturday upon member states of the Shanghai Cooperation Organization to move forward with development of interconnectivity networks and to improve the level of trade and investment facilitation to expand regional trade volume.

Li made the remarks in a speech at the 18th meeting of the Council of Heads of Government of the Shanghai Cooperation Organization in Tashkent, capital of Uzbekistan.

Together with other leaders from SCO member states, Li signed a joint communique and approved a raft of cooperation agreements covering sectors such as trade, railways and the digital economy.

In his speech, Li highlighted the importance of improving the landscape of connectivity in the region to enable better development paths.

"Focusing on infrastructure connectivity, we should invest more in pursuing new breakthroughs in the development of our region's transportation, energy, and information and communications networks," he said.

The cooperation mechanism between railway sectors of different countries must be put to better use, and the costs of trade and investment must be lowered, he said.

The SCO members will continue to explore viable approaches to setting up an SCO development bank to collectively provide reliable funding support for connectivity projects in our region, he added.

The premier also called for greater strategic alignment between the Belt and Road Initiative, regional cooperation mechanisms and development strategies of different countries.

Trade volume between SCO member states has expanded almost 10-fold since its founding in 2001 to reach $6.3 trillion in 2018, and the GDP of the member states accounts for about 20 percent of the global total, according to the Ministry of Commerce.

Li said that the international landscape is undergoing profound and complex changes, with unstable and uncertain factors increasing substantially and the growth momentum of the global economy receding.

It is important that SCO member states step up unity and mutual trust, enrich their cooperation and jointly cope with challenges, he added.

Security is the bedrock for development in the region, and member states should step up the development of counterterrorism structures and investigate the feasibility of an SCO anti-narcotics coordination mechanism, he said.

Fostering new highlights in innovation should be another priority to harness new growth engines, the premier said.

China will jointly set up a technology transfer center among SCO member states and carry out an international incubating program for young entrepreneurs from SCO countries, he said.

More training programs on poverty reduction will be made available, and China will offer free cataract surgery to 1,000 patients from SCO member and observer states, he said.

"SCO member states need to make concerted efforts to promote inclusive development, raise living standards, and strengthen peopleto-people exchanges and mutual learning, so as to deliver greater benefits to people in this region," he said.