AIIB headquarters to open in Beijing in early 2020 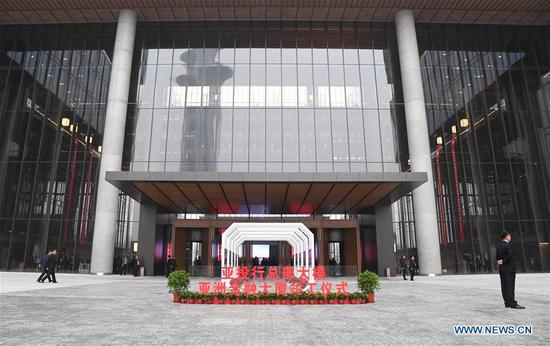 The Asian Infrastructure Investment Bank (AIIB) headquarters is expected to be operational in Beijing in early 2020, according to the Administration Committee of Beijing Olympic Park.

The headquarters is located in Beijing Olympic Park in Chaoyang District, eastern Beijing, and the AIIB and some policy banks will be the first batch of organizations moving into the newly-built building.

Five buildings, including the AIIB headquarters, are set to open in the park early next year, covering a total rental area of more than 500,000 square meters, which will house international organizations and enterprises in the fields of high-end services, fintech and culture and sports.

Surrounded by projects including talent apartments and the Winter Olympic Games village, the Beijing Olympic Park aims to become a gathering place for high-tech innovative enterprises and high-caliber talent from around the world. More than 20 Fortune 500 companies, including China State Construction Engineering Corporation, IBM and Sony, and their branches have offices in the central area of the park.

AIIB, launched in Beijing in October 2014, is a multilateral development bank that aims to support the building of infrastructure in the Asia-Pacific region.

The construction of the AIIB headquarters was completed last week.