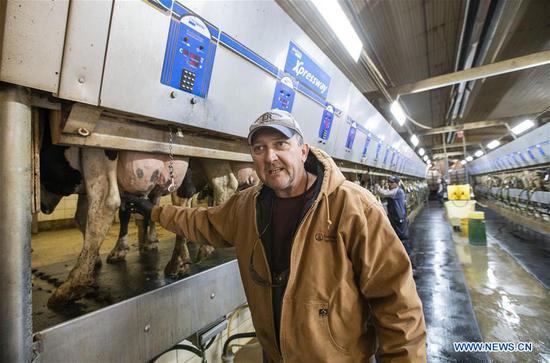 Kelly D. Cunningham, 52, a dairy farmer from the U.S. state of Iowa, was somewhat relieved when news about the progress in the new round of trade talks between Washington and Beijing circulated to the Midwestern state.

"We are very hopeful that the recent step forward will translate into actual movement of products and ships being loaded and unloaded and products leaving the United States," Cunningham, managing partner of Milk Unlimited Dairy Farms, a 3,400-head dairy operation in rural Cass County of Iowa, told Xinhua in a recent interview.

The dairy producer also voiced his wish that the two sides "can have things worked out in a year or two."

Since 2018, the U.S. administration has imposed several rounds of additional tariffs on Chinese imports, initiating a prolonged trade dispute between the world's two largest economies.

As countermeasures, China levied tariffs on a list of items imported from the United States, including some agricultural products like dairy.

Earlier this month, the two countries achieved substantial progress in multiple areas including agriculture, expansion of trade cooperation and dispute settlement after holding a new round of high-level economic and trade consultations in Washington.

This has renewed the hope of U.S. dairy producers, who are looking forward to boosting the industry after almost five years' struggle with low milk prices.

Cunningham, who entered the business in 1998, said that sustainable trade with China is crucial to the future of the U.S. dairy, especially in its pursuit of an ambitious goal to increase export by 5 percent.

"About 15 percent of our production goes overseas," he said, adding that the nation aims to export 20 percent of its dairy products to overseas markets.

Mexico was the top importer of U.S. dairy products in 2018. China, the third-largest single-country market for U.S. dairy in the same year, has a huge long-range upside as it is expected to become the world's largest dairy marketplace within the next few years, said analysts.

Over the past couple of years, about 10 percent of the dairy farms exit the business each year across the nation, mainly due to the instability of the market, said Cunningham.

Despite the continuous decline of dairy farms, the production of milk has not slowed. Industrial statistics showed that in the past decade, U.S. milk production soared 14.5 percent and milk production per cow increased 13.5 percent.

What makes the dairy farmers more disadvantaged is the rising competition they face from plant-based beverages like soy milk and almond milk in the domestic market.

With the state-of-the-art facility to milk dozens of cows efficiently and to produce around 34,000 gallons of milk for the marketplace per day, Cunningham managed to sustain his business amid market volatility.

However, he said he did feel the economic stress due to the administration's trade policy since last year.

The 12 months ending in September turned out to be one of the least profitable years for his farm in the past few years, according to Cunningham.

"Our current supply of dairy is burdensome on the market...we have a lot of cheese, butter as well as dried milk in warehouses that would generally be shipped out internationally," said the veteran dairy producer.

He was worried that the price would be further dragged down if the stockpiles continue to accumulate.

"The trade tension has definitely hurt the milk market, hurt the milk price and that translate into lower profits here at the dairy," he said.

An estimated 2.3 billion dollars in revenue is calculated to have been lost during the first three months of 2019 because of tariffs that lowered milk prices, according to the U.S. National Milk Producers Federation.

The industry has created nearly 3 million U.S. jobs that generated around 159 billion dollars in wages.

Calling for an early settlement of the U.S.-China trade disputes, Cunningham underscored the importance of deepening collaboration between the world's top two economies.

"We need China, we need that international market to make sure prices stay good and we're able to keep producing like we are," he said.

So far, many individuals, organizations as well as business groups in the United States have voiced their concerns about the tariffs' ripple effects and yearn for a settlement.

U.S. anti-tariff advocacy group Tariffs Hurt the Heartland warned that as the country's trade disputes with its trading partners persist, repercussions will be felt by farmers, factory workers and everyday consumers nationwide.