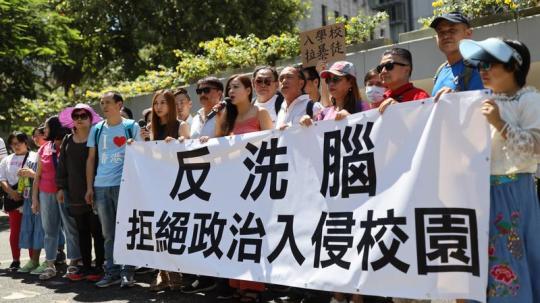 A group of about 60 Hong Kong parents stage a protest at Central Government Offices in Admiralty on Sept 22, 2019 against campus politics that threaten to "brainwash" their children in schools. （PHOTO/CHINA DAILY）

Universities are never battlegrounds for resolving political issues, nor should they be dragged into picking sides in politics, heads of eight university councils said.

In a joint statement issued on Sunday, they stressed that universities have zero tolerance for any form of violence on campuses, and do not accept vandalism against university properties.

The statement came a day after former chief executive Leung Chun-ying slammed Vice-Chancellor of the Chinese University of Hong Kong Tuan Sung-chi for saying he would condemn alleged police brutality if it's confirmed.

Since the protests against the now-withdrawn extradition bill broke out in June, several students from the eight universities have been arrested for joining illegal assemblies.

The university heads also stressed that assistance given by the universities to those students who were detained is made out of pastoral care, and does not mean the institutions support the students' political views.

In response to repeated calls for class boycotts on campuses, the chiefs said all classes should be conducted according to curriculum syllables, and those who don't want to have classes must not disrupt any academic activity or force others to join them.