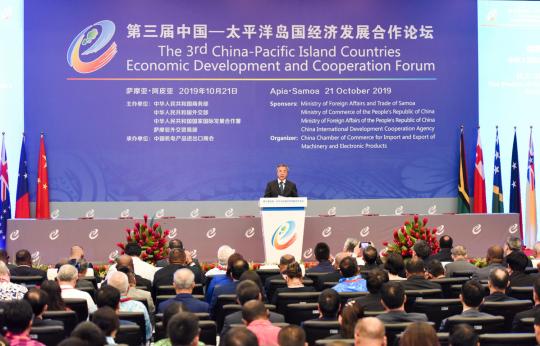 President Xi Jinping has called on China and the Pacific island countries to make full use of a key platform provided by a bilateral forum to achieve greater progress in cooperation between the two sides.

He made the remark in a congratulatory letter sent on Monday to the third China-Pacific Island Countries Economic Development and Cooperation Forum held in Apia, capital of Samoa.

In his letter, Xi recalled his meeting with leaders of Pacific island countries in November in Papua New Guinea.

He said that their consensus on elevating their relations to a comprehensive strategic partnership of mutual respect and common development, reached at the meeting, has ushered in a new stage of relations between the two sides.

The forum represents an important consensus reached at the meeting, Xi said, adding that he hoped the two sides will take full advantage of the platform to strengthen dialogue, exchanges and cooperation to push for greater progress.

Vice-Premier Hu Chunhua, who attended the opening ceremony of the forum, said Xi's letter charted the course for the event.

China stands ready to work with the Pacific island countries in jointly building the Belt and Road, sharing development experience to improve their capacity for sustainable development and boosting trade and investment exchanges, Hu said.

Hu and leaders of the island countries that established diplomatic ties with China jointly witnessed the signing of an action plan for economic development and cooperation.