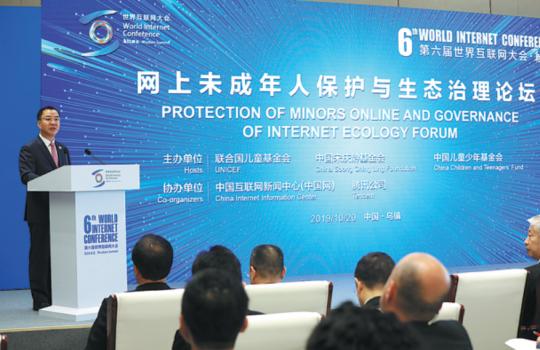 A forum on protection of minors online and governance of internet ecology is held during the World Internet Conference on Sunday. (Photo by Zhu Xingxin/China Daily)

Efforts from all walks of life are needed to build a safe cyberspace and maintain the physical and psychological health of Chinese juveniles, government officials said on Sunday.

"Protecting the internet rights of juveniles and enhancing the governance of internet ecology have become concerns of all of society," Liu Liehong, vice-minister of the Cyberspace Administration of China, said at a forum in Wuzhen, Zhejiang province.

The Chinese government, enterprises, institutions and individuals, as well as the international society, are expected to join hands to build a better internet ecosystem to protect juveniles from harm, he said.

The number of juvenile netizens reached 178 million in China, and the popularity rate of internet among Chinese minors was 93.7 percent, according to Liu.

"The internet has become an important factor that influences the healthy growth of juveniles. Chinese teenagers get access to the internet for the first time at increasingly young ages. They have become real digital natives," he said. "Meanwhile, the risk of minors being harmed by the internet has increased, with illegal information access, personal privacy leaks and internet addictions all rising. Up to one-third of Chinese minors have accessed illegal information, such as violence, gambling, drug abuse and pornography at least once."

Wang Jiarui, chairman of the Soong Ching Ling Foundation, noted the internet plays an important role in cultivating teenagers' education, but it's a double-edged sword.

"Improper use of the internet harms juveniles' rights, and severely damages their physical and mental health," Wang said. "It is important to create clean cyberspace."

To this end, Omar Abdi, deputy executive director for programs at the United Nations Children's Fund, suggested the government joins hands with businesses, NGOs and agencies to keep children safe in the online world.

On Aug 22, the Cyberspace Administration introduced the Provisions on the Cyber Protection of Children's Personal Information, offering legal protection for children's online rights. New regulations on the governance of internet ecology are under discussion and will be rolled out soon.

Apart from the government, many Chinese internet enterprises are also taking active steps.

To clean up the online environment to protect juveniles, question-and-answer website Zhihu launched a system called Wukong to combat traffic cheats and false advertising. Later on, an algorithmic robot called Wali was introduced. The robot can precisely detect and deal with abusive contents online.

"The online world is a mapping of the real world. Internet companies must not only assume the role of maintaining order in the real society, but also foster the growth of content that promotes social development and civilization," said Zhou Yuan, founder and CEO of Zhihu.

"Currently, internet companies have shifted the focus of their competition from traffic to quality. High-quality content now is no longer a passing line, but the core of whether a company can achieve sustainable development," Zhou said.

"The competition will help us create a civilized, healthy and prosperous network ecosystem, and enable the internet to become a powerful force to promote social progress."