Achievements set to provide 'impetus' to future of humanity 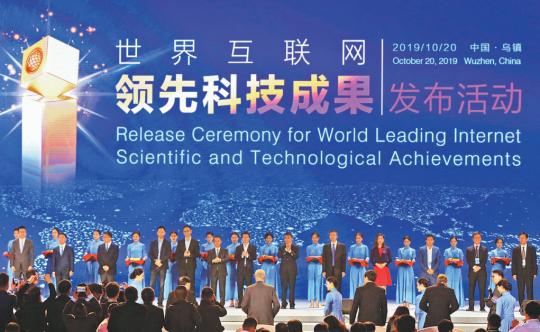 Fifteen cutting-edge achievements made by leading technology giants from China and abroad were among the winners of the world leading internet scientific and technological achievements unveiled at the sixth World Internet Conference on Sunday.

"These achievements have given or will give a strong impetus to human life, scientific and technological progress, economic development and social transformation," said Wu Hequan, an academician of the Chinese Academy of Engineering, who is also the Chinese co-chair of the recommendation committee for this year's world leading internet scientific and technological achievements.

The achievements were selected from a pool of more than 300 candidates by voting of the experts team from China and abroad.

Shi Luping, director of the center for brain-inspired computing research, Tsinghua University, led a team that published the first Nature paper among Chinese researchers in the fields of artificial intelligence and chip.

According to Shi, their hybrid chip could be easily used in applications including autonomous driving, drones and intelligent robots.

As Alibaba's next generation cloud-native distributed database, it provides key technology support to the enormous Singles Day sales spree that saw its revenue surge from 520 million yuan ($73.45 million) to 213.5 billion yuan in the past decade.

"We're living in an era of technology explosion, and we're laying the foundation for the big bang of technologies," said Chen Tianshi, founder and CEO of Cambricon, which won the award for its latest cloud-based artificial intelligent chip MLU 270.

Tesla's full self-driving chip will not only safeguard the smooth operation of autonomous driving, it will also be an important part for a shared network that will be vehicle owners' assets, according to Tao Lin, vice-president of Tesla Inc.

"Such vision cannot be achieved without the support of the Chinese government and every client," she said.

"From the birth of the World Wide Web to mobile internet becoming the main force of the new round of global internet development, to today's 5G application and intelligent internet of things, the internet is changing people's daily life more profoundly and driving future development," Wu said.

The internet turns 50 years old in 2019. The development of the internet has pushed human society into the intelligent era of comprehensive perception, reliable transmission, intelligent processing and accurate decision-making.

Foreseeing these changes is the purpose for the release of the world's leading internet scientific and technological achievements. It also enables internet users to continuously explore their own potential and build confidence and strength to face a more exciting and challenging future, Wu added.