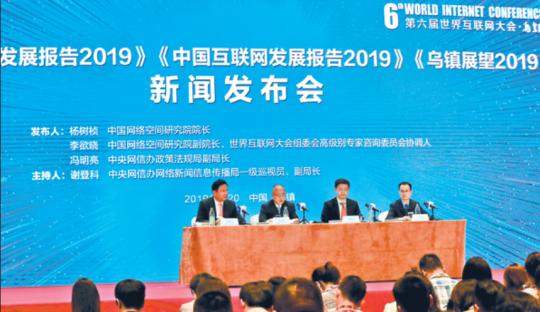 The latest reports about internet development are published during the sixth World Internet Conference. (Photo by Zhu Xingxin/China Daily)

China has taken a top spot among 48 economies in internet development, with an apparent rise in innovation capacity, internet applications and industrial development, according to new reports released on Sunday.

In the newly published index, which gauges six aspects including infrastructure level, innovation capacity and cyberspace governance, China's internet development ranked second, behind the United States. The other economies in the top five were South Korea, the United Kingdom and France.

The country has also witnessed growth of some key internet resources, including 5G and IPv6, the most recent IP system. The nation now has 130 million active IPv6 users and is expected to have the highest number globally by 2025.

The reports come at a time when the global internet has been developing for more than 50 years and China is gaining new momentum in internet development, said Yang Shuzhen, head of the Chinese Academy of Cyberspace Studies.

"Countries around the world have taken cyberspace development as a critical factor to achieving a beachhead ... China, as an internet power, has also made significant contributions," Yang said.

In terms of innovation capacity, the US, China and Japan took the top three places. The country's rise of innovative ability globally can be seen by its rising number of patents in information technologies, the report said.

In 5G in particular, China has contributed 34 percent of patents essential to 5G standards in the world by March, according to German patent data company IPlytics.

The country granted commercial 5G licenses earlier this year and leading local telecom carriers are working to build a sound network infrastructure to accelerate the commercialization.

Ke Ruiwen, chairman of China Telecom, the country's major telecom carrier, said at the conference that the company will drive the deep promotion of 5G and other forefront technologies to make everything connected intelligently.

"With the deep integration of 5G, cloud computing, big data and artificial intelligence, we aim to speed up the digitalization of different industries for more new growth engines," Ke said.

China Telecom said earlier it will work with key smartphone vendors to unveil 5G handsets priced under 2,000 yuan ($282) in the first half of next year, far earlier than predications made by experts.

The carrier has cooperated with home appliances suppliers including Xiaomi Corp to develop applications enabled by the superfast 5G, Ke disclosed on Sunday.

Its rival China Mobile, the world's leading mobile operator, said the company plans to cover 50 cities across China with 5G signals by the end of this year, which will involve deploying 50,000 5G base stations across the country.

The company has also raised 7 billion yuan as the first phase of a 5G fundraising to promote the development of key technologies. The planned total size of the funding is 30 billion yuan.

While China has made breakthroughs in internet development, the report also pointed out that China still lags behind in some sectors such as cybersecurity.

"It is necessary for China to beef up input on cybersecurity," said Yang Yuyan, deputy director-general at the cybersecurity administration bureau of the Ministry of Industry and Information Technology.

"The current online threats are real and multifaceted. Cyberattacks and risks have become increasingly rampant, and they break the boundaries between the physical world and the virtual network," she explained.

More efforts are expected from the government, companies and institutes to help foster breakthroughs in key technologies and build a good ecosystem in the sector, she added.