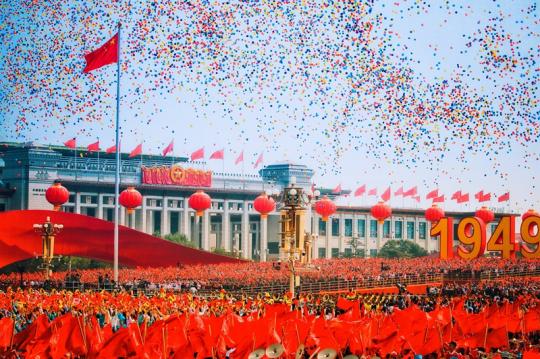 Colorful balloons fly at the end of the mass pageantry to mark the 70th anniversary of the People's Republic of China on Oct 1, 2019. (Photo/chinadaily.com.cn)

Celebrations marking the 70th anniversary of the founding of the People's Republic of China can serve as a strong impetus for people to press ahead in the new era, President Xi Jinping said.

Xi, also general secretary of the Communist Party of China Central Committee and chairman of the Central Military Commission, made the remark while presiding over a recent meeting of the Standing Committee of the Political Bureau of the CPC Central Committee.

He said the celebrations fully showcased the country's glorious achievements over the past 70 years and displayed its national strength and military prowess.

The National Day festivities on Oct 1 greatly boosted the morale of the Chinese nation and strengthened various sectors, he said.

The celebrations created a mighty force as the whole Party, the whole military and the whole nation march toward realizing the first of the "Two Centenary Goals" — building a moderately prosperous society in all respects by 2021, he said.

They also serve as a proud demonstration of the shared ideals of all sons and daughters of the Chinese nation toward realizing the Chinese dream of national rejuvenation, Xi said.

As the world undergoes major changes unseen in a century, the celebrations were a grand show for the nation — always standing firm in the East, becoming even more prosperous and even stronger, he added.

The celebrations, which involved large numbers of units and required extensive participation from all sectors of society, needed much preparation and arduous organizational efforts, Xi said.

The resounding success can be attributed to the strong leadership of the CPC Central Committee and joint efforts from the entire Party, military and nation, he said.

The celebrations displayed the patriotism of the public, and it is important to take the opportunity to strengthen the guiding role of patriotism in society, Xi said.

His speech was read out on Wednesday at a meeting to summarize the 70th anniversary celebrations at the Great Hall of the People.

While speaking with delegates to the meeting, Xi expressed his gratitude and encouraged them to make new contributions.

The celebrations included a grand military parade and a gala performance at Tian'anmen Square in Beijing on Oct 1.