Nepal, a tourism treasure comes in from the cold 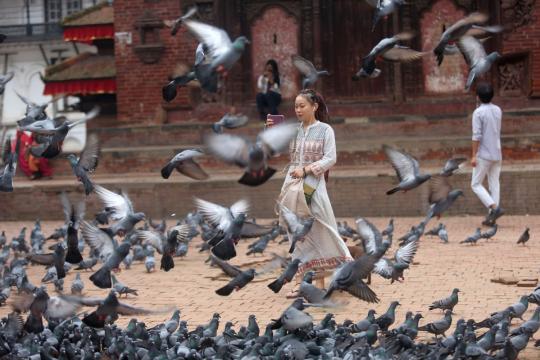 A tourist takes photos of pigeons in front of a temple in Kathmandu, Nepal, on Sept 27. (Photo/Xinhua)

With its breathtaking snowcapped mountains and strong Buddhist culture, Nepal is recovering from the devastating 2015 earthquake and embracing more Chinese travelers, according to travel agencies.

However, it remains a hidden treasure for the majority of Chinese travelers even though it has started to become more popular in recent years.

54 Traveler, an online travel agency in Shanghai, said that Nepal's tourism industry had been in a downturn since the massive earthquake on April 25, 2015, with only a "slack" recovery till early last year.

Li Mengchi, a travel itinerary designer with 54 Traveler, said that Nepal's snowy mountains, the World Heritage-listed Chitwan National Park, and activities such as hiking and paragliding are the biggest lures for Chinese travelers.

In 2017, about 120,000 Chinese visited Nepal, while the number rose to 150,000 last year. Of those, 70 percent said their purpose for visiting was tourism, according to Ctrip, an online travel service provider with its headquarters in Shanghai.

One of China's largest travel agencies, Qunar, said that tour package reservations to Nepal had seen a 3 percent year-on-year increase so far this year. This was mainly due to the Belt and Road Initiative, it said.

Bu Qingru, general manager of Suiyi Travel in Lhasa, Tibet autonomous region, started travel services to Nepal in 2005. Initially most of the interest was from South Korean travelers.

"The situation has changed since 2017 when more Chinese travelers started to come to the agency to get information about Nepal," Bu said.

He said that though Nepal has seen growth in its tourism industry, it remains a niche destination for Chinese people which needs to be developed.

"Independent tours of photographers and backpackers make up the majority of our business," he said. "But recently, traveling in Nepal by car has emerged as a new popular choice."

According to Bu, travelers drive their cars to Lhasa and then head to Nepal's capital Kathmandu through Key Rung, the border post connecting Nepal and Tibet.

Ni La, director of the outbound tourism department at Lvmama, an online travel agency in Shanghai, said that Nepal's tourism industry was in its infancy and its great potential had yet to be unleashed.

"More promotion about the nation should be implemented to let more Chinese people know about the beautiful scenery and culture there. It needs more flights connecting to China," she said.