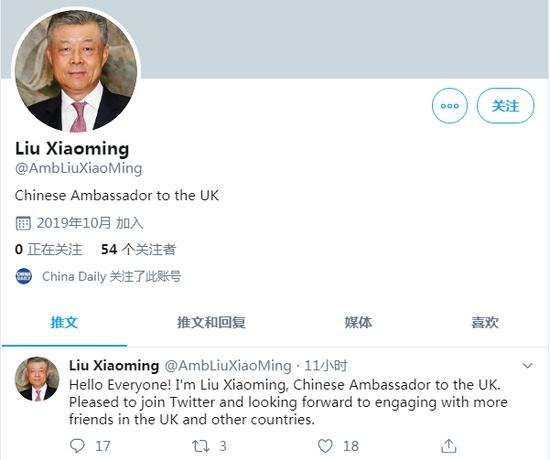 The Chinese Ambassador to the United Kingdom Liu Xiaoming became the latest Chinese diplomat to bolster communications with internet users worldwide when he opened his Twitter account on Monday.

"Pleased to join Twitter and looking forward to engaging with more friends in the UK and other countries," Liu said in his first tweet from his new handle@Amb－LiuXiaoMing.

Born in 1956, the veteran envoy took the lead role at the Chinese embassy in London in 2009, and gives frequent interviews to British media, including with the BBC.

He has published a slew of articles that cover a range of China's diplomatic policies, address hotspot issues, and call for greater cooperation between China and the United Kingdom.

Analysts said the increasing number of Chinese diplomats now on Twitter helps boost public understanding of the nation's evolving policy agenda, and could help to reduce any misunderstanding.

Liu's maiden Twitter post adds him to the ranks of tweeting senior Chinese diplomats, including China's Ambassador to the United States Cui Tiankai, and Zhao Lijian, a former diplomat with the Chinese embassy in Pakistan.

Zhao started tweeting in 2010 and has more than 200,000 followers. Cui joined the social network this July.