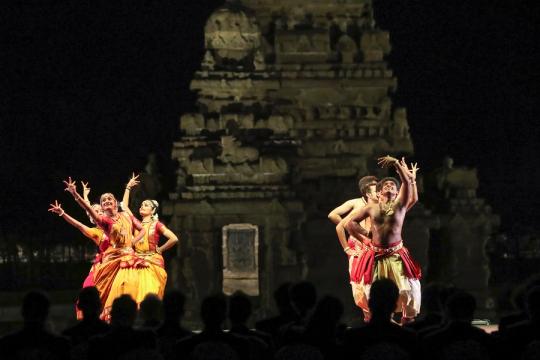 Dancers perform at a cultural event at which Indian Prime Minister Narendra Modi and President Xi Jinping were in attendance at a temple in India on Friday. (Photo by XU JINGXING/CHINA DAILY)

B.R. Deepak, a professor of Chinese and China Studies at Jawaharlal Nehru University's Centre of Chinese and Southeast Asian Studies in New Delhi, said that the Chennai summit in southern India is an indication that both sides have formalized such meetings following a previous summit in Wuhan, Hubei province, last year.

During the Wuhan summit, the two leaders agreed to issue strategic guidance to their militaries to build trust and mutual understanding.

"Therefore, no agreements are signed, no joint statement is issued and there is no news conference, implying that there are no expectations or deliverables on the part of leaders. Hence, they could be said to be at ease during informal summits," Deepak said.

The professor pointed out that such informal summits ensure that the leaders get enough space for one-on-one discussions so that both get to know and understand each other better.

As demonstrated by the Wuhan summit, there has been new momentum in bilateral ties, and both have emphasized that they need to be more considerate of each other's sensitivities, Deepak added.

The professor said that the Chennai summit is going to bring more outcomes of economic cooperation as bilateral trade has increased rapidly in recent years and Chinese investment in India has risen.

Bilateral trade between China and India increased by 13.2 percent to a historical high of $95.54 billion last year, according to the Ministry of Commerce.

"I believe economic cooperation will be the focal point of the second informal summit between Prime Minister Modi and President Xi," he said.

In addition to bilateral issues, the two countries are joining hands through various multilateral platforms such as BRICS, the Shanghai Cooperation Organization and the G20 Summit, and have worked together on issues including climate change, he said.

Noting that there remain disagreements between the two sides on such issues as the border and maritime security, Deepak said that the bilateral relationship has matured over time, and both are handling and managing the differences well while expanding their convergences.