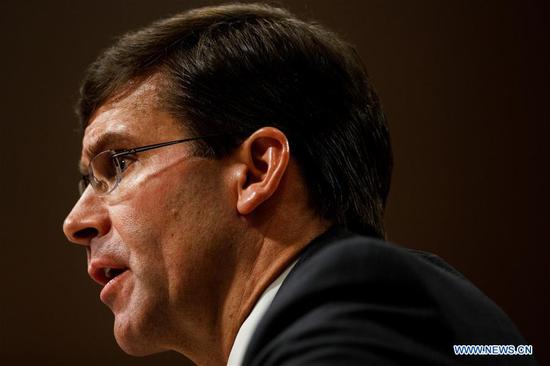 U.S. Secretary of Defense Mark Esper on Friday authorized an additional deployment of U.S. military forces to Saudi Arabia to enhance the defense of the country.

The statement noted that the Pentagon chief on Friday had informed Saudi Crown Prince and Minister of Defense Mohammed bin Salman of the latest force deployment, which aims to assure and enhance the defense of Saudi Arabia.

The statement made no mention of the exact number of the troops of the deployment.

Citing senior defense officials, U.S. media reported the troops' number of the deployment authorized on Friday is around 1,800.

The Pentagon had increased the number of forces by approximately 14,000 to the U.S. Central Command area of responsibility since May, according to the statement.

The tensions between the United States and Iran have been escalated in recent months, pushing the region towards military conflicts.

Washington blamed Tehran for being responsible for the drone attacks on oil production facilities in eastern Saudi Arabia last month, a claim that has been strongly denied by Tehran.