Xi given warm welcome in India 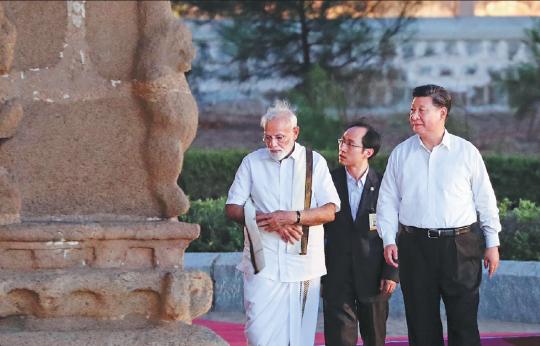 President Xi Jinping walks with Indian Prime Minister Narendra Modi after he arrives in Chennai, India, on Friday. Xi's trip, which extends into the weekend, includes a second informal summit with Modi and the first visit to Nepal by a Chinese president in 23 years. (XU JINGXING/CHINA DAILY)

President Xi Jinping arrived in Chennai on Friday for the second informal summit with Indian Prime Minister Narendra Modi, which analysts said is expected to enhance political trust between the world's two most populous countries.

The president received a warm welcome on his arrival, with local people holding up photos of the two leaders and waving the countries' national flags along the road.

More than 5,000 local students lined the route from the airport to the Chinese delegation's hotel, the Times of India reported.

Xi and Modi visited three iconic monuments — Arjuna's Penance, Pancha Rathas and the Shore Temple — at Mamallapuram, a tourist town famous for its stone carvings 60 kilometers south of Chennai. They took in a cultural program at the temple complex.

The two leaders sat on the lawn at the temple and exchanged views on development and cooperation. Modi hosted a private dinner for Xi at the temple complex after their talks.

Vikram Misri, Indian ambassador to China, said the two leaders are using a highly unusual format in holding such an informal summit, the second after a similar summit in Wuhan, Hubei province, last year.

"I don't think either India or China has this kind of mechanism with any other leader in the world for the leaders to meet informally and to speak and discuss without a set agenda," he said.

Despite the summit's relaxed nature, the ambassador said it is expected to provide direction to officials on both sides so they can "address better the issues that we have been dealing with over a long period of time".

In their first informal meeting last year, the two leaders reached the consensus that the differences between the two countries should not be allowed to turn into disputes.

"Both of us have to work to ensure that this consensus is fully respected," Misri said, adding that preserving peace and tranquility on the borders is crucial for the stable development of bilateral relations.

He said that both Modi and Xi are "very strong and very popular leaders", and they are fully capable of shaping the future of the bilateral relationship in a constructive and mutually beneficial direction.

India has made considerable effort to ease travel and visa procedures for Chinese tourists, and the country is expecting more Chinese travelers, he said.

"Last year there were 134 million Chinese tourists traveling abroad, but only 240,000 went to India. I think this number can easily be multiplied at least fivefold if not tenfold in just the coming few years," he said.

Misri also stressed the importance of India-China cooperation under multilateral frameworks such as the Shanghai Cooperation Organization, BRICS and the G20.

India and China have similar concerns and some similar stances among global issues such as climate change, and the two countries have worked together constructively, he said.

"If we can speak on the basis of larger concerns between us, then it would be a significant voice that would be heard on the global stage, of two of the largest countries in the world working together," he said.

Misri highlighted their cooperation in setting up the New Development Bank under the BRICS grouping of nations. The bank, headquartered in Shanghai, is currently headed by Kundapur Vaman Kamath, former chairman of ICICI Bank, India's largest private sector bank.

The New Development Bank and the China-initiated Asian Infrastructure Investment Bank are important contributions to development and investment finance, he said.

The second informal summit is expected to continue to guide the development of China-India relations from a strategic and global perspective, said Zorawar Daulet Singh, a fellow at the Delhi-based Centre for Policy Research.

It shows that both leaders hope for bilateral ties to develop steadily, and the second informal meeting is seen as carrying that forward, Singh told Xinhua News Agency.