Overloading suspected as cause of bridge collapse 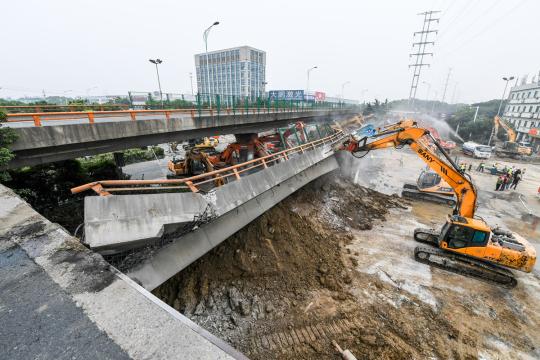 Rescue team works at the site of an overpass collapse in Wuxi, Jiangsu province, on Friday. Three people have been confirmed dead and two others injured. (LI BO/XINHUA)

The collapse of an overpass in Wuxi, Jiangsu Province, which killed three and injured two, may have been caused by overloaded vehicles.

The collapse happened at about 6:10 pm on Thursday along National Highway 312. Photos and videos from the site show that the overpass overturned on one side and collapsed.

Three cars were flattened－two passing under the overpass and one unoccupied car parked beneath it－according to a release from the Wuxi government's information office.

No one was inside the parked car, but three people in the other two cars were killed, the release said.

According to Caixin magazine, the dead were a man, a woman and her 5-year-old girl.

Five other vehicles, including three sedans and two trucks, were on the overpass when the collapse happened. They crashed into the guardrail, leaving two injured, according to the release.

A preliminary investigation suggested that the collapse was caused by heavily overloaded vehicles, the release said.

A witness surnamed Yu, who runs a dumpling restaurant nearby, said several trucks were on the overpass at the time.

"One of the trucks carrying six piles of steel coils overturned and then the bridge collapsed," he was quoted as saying by Caixin.

Zhu Lei, a professor in civil engineering at Beijing University of Civil Engineering and Architecture, said this type of accident happens mostly to single-pier bridges, which have a single column in the middle supporting both lanes. Such a design used to be popular because it saves space, but now there are more double-pier bridges with supports on both sides.

Zhu said that single-pier bridges are safe as long as they meet standards. However when overloaded trucks frequently drive on these bridges, one side of the pier may become damaged and in the long run can collapse.

A similar accident in 2012 in Harbin, Heilongjiang province, was caused by overloaded vehicles.

Zhu said that even double-pier bridges face risks if their concrete and reinforced steel bars become damaged by excessive weight.

Some high-level bridges have sensors to monitor inner stresses and possible deformation, while ordinary bridges require regular checks and maintenance.

On Aug 19, the Ministry of Transport said that a vehicle's operating license will be revoked if it's found overloaded three times in a year.