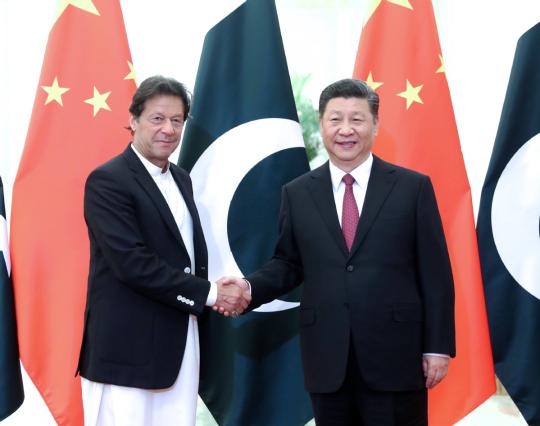 President Xi Jinping called on Wednesday for building an even stronger China-Pakistan community with a shared future in the new era through strengthening strategic coordination and pragmatic cooperation between the two neighbors.

Xi made the remark during a meeting with visiting Pakistani Prime Minister Imran Khan at the Diaoyu-tai State Guesthouse in Beijing.

Xi described the two countries as "unique all-weather strategic cooperative partners". He said that, despite profound changes in the regional and international landscape, the friendship between China and Pakistan has always remained unbreakable and as solid as rock, and their cooperation has maintained strong vitality and kept expanding and intensifying.

China has always seen Pakistan as a priority on its diplomatic agenda, and Beijing will continue to firmly support Islamabad in the issues that relate to its core interests and major concerns, Xi said.

He underlined the need for the two countries to maintain much closer high-level exchanges and strategic communication as well as timely coordination of their positions on major issues.

Khan briefed Xi on his country's position on the current Kashmir tensions, and called for efforts to prevent the situation from deteriorating or even getting out of control.

He said Pakistan considers China's stance on the issue highly important and appreciates it for upholding a fair and objective position.

Xi expressed China's concerns over the situation. He said China supports Pakistan in safeguarding its lawful rights and interests, and hopes the parties will resolve their disputes through peaceful dialogue.

Speaking of the celebration of the 70th anniversary of the founding of the People's Republic of China, Xi said the unprecedented patriotic enthusiasm of around 1.4 billion Chinese people has built up the country's confidence in and determination for overcoming all difficulties in pursuing the path of socialism with Chinese characteristics.

Xi also urged more effort in advancing the construction of the China-Pakistan Economic Corridor with higher standards to make it a model project for the high-quality building of the Belt and Road.

China greatly appreciates and resolutely supports Pakistan in its efforts to fight terrorism, he said, adding that both countries should strengthen communication and cooperation within multilateral platforms to jointly uphold regional peace and stability.

Khan commended the extraordinary achievements China has made over the past decades. He said Islamabad looks forward to working with Beijing to strengthen exchanges, coordination and cooperation, firmly pushing for the economic corridor's construction and jointly building a model of success in Belt and Road construction.