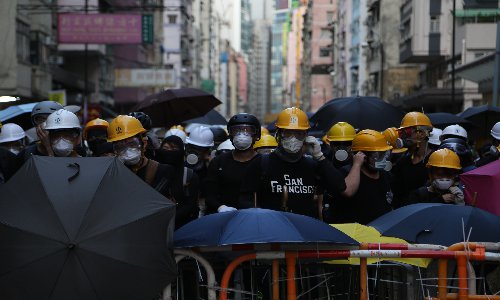 The government's decision to invoke emergency powers to enact the anti-mask law will not affect the city's status as a major financial hub, and there is no other timely plan but to bring in the new law to quell the continuing violence, Hong Kong SAR government officials said on Sunday.

Following four months of social turbulence, if the serious criminal offenses continue, the society would be engulfed by the cycle of violence resulting in bullying and oppression of the Hongkongers, Paul Chan Mo-po, Financial Secretary of HKSAR, blogged on Sunday.

"There is only one target of the enacted anti-mask law, to make sure there's no place for rioters to hide," he said, noting that stopping the violence and illegal acts could give Hong Kong the room to "take a break."

The anti-mask law took effect on Saturday, which forbids people at illegal public assemblies to conceal their identity with face masks or other shades. Violators could face up to one year in jail and a fine of HK$25,000 ($3,188). And it comes with some exceptions.

While some observers worry whether Hong Kong Special Administrative Region (HKSAR) government would use the emergency powers to limit the capital flows, Chan said it would not happen, as the Basic Law guarantees the free capital flows, and that the Hong Kong dollar shall be freely convertible. Meanwhile, markets for foreign exchange, gold, securities, futures and the like shall continue, according to the law.

Recent incidents of vandalism and arson attacks across the city have seriously affected banking services, as 10 percent of ATMs were damaged by rioters, according to media reports, citing the Hong Kong Monetary Authority. Some netizens raised the question regarding the city's status as an international financial center; however, the government official said the Hong Kong financial market would remain stable, rebutting online malicious rumors to stir panic.

"The Linked Exchange Rate System has helped us overcome different economic cycles, and the local banking system is very robust," Chan said, noting that the average capital adequacy ratio of banks in the city reached 20 percent, and the liquidity coverage rate is 150 percent with only 0.56 percent of nonperforming and bad debt.

"We are determined, capable, and have resources to maintain the monetary and financial stability in Hong Kong," he added.

Opposition groups have filed an application for a judicial review on Saturday, challenging the ban, as they consider that the ban constitutes a disproportionate interference with the right to peaceful assembly and the freedom of expression of Hong Kong people.

Given the current situation of public safety being seriously jeopardized, there is no other timely plan but to enact the anti-mask law to stop the violence, Chief Secretary Matthew Cheung wrote in his blog on Sunday.

Anti-mask law won't erode the freedom of speech and the rights of Hong Kong people, he said, noting that the law is aimed at deterring rioters, reducing violence, and helping police investigate and gather evidence. People can still gather peacefully with due permission.

Facing ongoing social unrest, the authorities would remain vigilant to come up with preventive measures to keep the financial market stable, the financial secretary said.