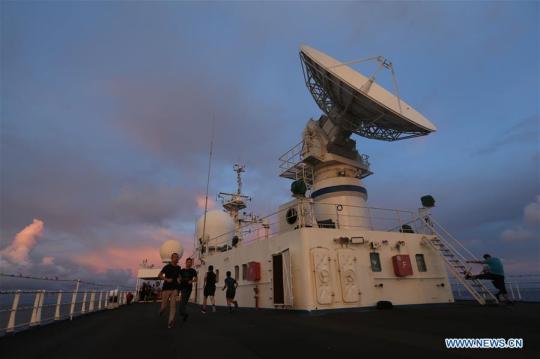 China's spacecraft tracking ship Yuanwang 3 sails in the waters near the equator on June 18, 2019. （Photo/Xinhua）

China's spacecraft tracking ship Yuanwang 3 is sailing to the Pacific Ocean to carry out maritime monitoring missions for the BeiDou 3 and other satellites.

The ship departed Sunday from a port in East China's Jiangsu province. It is the third voyage of the ship this year.

Before the voyage, crew members completed preparation of supplies, carried out examinations and tests of the facilities and received tailored training to ensure the success of the missions.

This year, the ship has spent 83 days at sea and completed three missions, including maritime monitoring of a relay satellite Tianlian II and a BeiDou 3 satellite.

Since it was launched more than 20 years ago, the ship has made 52 voyages and completed 83 missions on the sea, including maritime tracking of the Shenzhou spacecraft, the Chang'e lunar probe and BeiDou satellites, maintaining a 100 percent success rate.