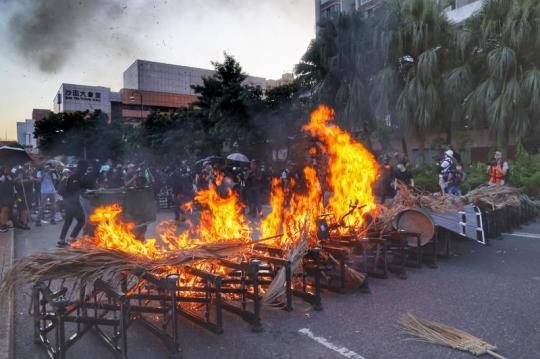 Violent protests, along with arson and indiscriminate vandalism of metro stations by radical demonstrators, dragged Hong Kong into its 16th weekend of social unrest in defiance of government and public condemnation, and a police crackdown.

The HKSAR government strongly condemned the continued violence and vandalistic acts in various districts across the territory for the second day in a row on Sunday.

A government spokesperson said the behavior of the radical protesters is not only illegal, but also in total disregard for the rights of members of the public and extremely selfish.

At least eight MTR stations across the city were forced to shut down on Sunday after black-clad protesters smashed up facilities, including ticketing machines, and went ahead with their threat to paralyze transportation to Hong Kong International Airport.

The violence continued despite the HKSAR government having withdrawn the extradition law amendment bill that triggered the mass protests in mid--June, as well as Chief Executive Carrie Lam Cheng Yuet--ngor's pledge to reach out directly to the community and start a series of open dialogues, starting from Thursday, in an effort to resolve the city's deep-rooted issues.

At an event on Sunday organized by the Hong Kong Federation of Trade Unions to mark the 70th anniversary of the founding of the People's Republic of China, Lam said Hong Kong has faced enormous challenges in the past few months, and the sustained violence has had a detrimental impact on the working conditions and lives of people in various trades and professions.

However, she's confident that the SAR will continue to prosper and remain stable after the turmoil is over. By taking a unique and full advantage of "one country, two systems", Hong Kong will still make constant progress, Lam said.

At around 9 pm on Sunday, protesters gathered in front of Mong Kok Police Station in Kowloon, shouting at and cursing the police, while setting fires and erecting barricades on nearby roads. Their ferocity intensified, hurling projectiles at the police after officers arrested a man and shoved him into the station.

Police fired a warning shot and used tear gas and pepper spray to disperse the crowds. MTR Corp was forced to shut down both Mong Kok and nearby Prince Edward stations.

About 1,000 black-clad protesters had gathered at a shopping mall near Sha Tin MTR station in the afternoon, chanting slogans and singing songs.

As on most other occasions in the past few months, it soon descended into violence as rioters set fires near the station, blocked roads with metal barricades and trolleys, and sprayed water on the floor to block the police from carrying out their duties.

The chaos threatened the safety of people in the neighborhood and seriously affected traffic in the vicinity. Some protesters also desecrated a Chinese national flag near the shopping mall, stamped on it, smeared it and dumped the flag into a trash can before throwing it into a river. They also smashed surveillance cameras and metro ticketing vending machines at Sha Tin MTR Station in total disregard for warnings from the government, the police and MTR Corp — the city's sole railway operator.

Late on Saturday night, at least three men who criticized the rioters' reckless behavior and blamed for tearing down anti-government posters from "Lennon Walls" were assaulted by rioters armed with with metal rods in Yuen Long, the New Territories.

They were seen bleeding seriously and taken to hospital. Armed with all sorts of offensive weapons, including iron sticks and laser guns, groups of protesters also gathered in Tuen Mun, the New Territories, on Saturday, burning a Chinese national flag, hurling gasoline bombs and throwing metal rods onto the railway track at a light rail station.

Tony Kwok Man-wai, former deputy commissioner of the anti--corruption watchdog, the Independent Commission Against Corruption, said the protesters are aiming to discredit and dismantle the HKSAR government, and undermining the morale of the police is a critical step.

But, Commissioner of Police Lo Wai--chung said earlier this week he's confident that the 30,000-strong police force will emerge stronger and overcome the unprecedented challenges as long as they stay united and keep faith along the rocky path.