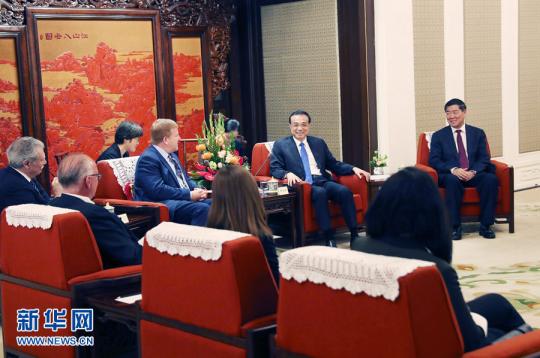 Premier Li Keqiang meets with a delegation of U.S. business leaders in Beijing, on Sept 10, 2019. [Photo/Xinhua]

China and the United States should seek common ground and come up with ways of resolving differences that are acceptable to both parties, Premier Li Keqiang said on Tuesday.

Li, speaking at a meeting with a delegation of U.S. business leaders in Beijing, said the two nations should act on the two presidents' consensus based on the principle of equality and mutual respect.

China and the U.S., as the world's largest developing country and developed country, share broad common interests, he said, adding that bilateral economic and trade relations have continued to advance during the 40 years of bilateral diplomatic relations.

The nations have agreed to hold the 13th round of high-level economic and trade consultations next month in Washington in a fresh attempt to bridge differences and make substantial progress, the Ministry of Commerce said last week.

Li said that China, with its large market, welcomes businesses from other countries, including the U.S., to expand trade and investment cooperation in China and enable win-win outcomes. China will only become more open, and the country is committed to developing a business environment in line with market principles, the rule of law and international standards, he said.

He also reiterated China's commitment to unbiased treatment for domestic and foreign-invested businesses registered in China, saying that greater efforts will be made to protect intellectual property rights. China has opened up its manufacturing sector across the board, and the opening-up of its services sector is being accelerated, he said.

In the latest effort to boost opening-up, the State Administration of Foreign Exchange announced on Tuesday its decision to scrap foreign investment limits in stock and bond markets.

The U.S. delegation is headed by Myron Brilliant, executive vice-president and head of international affairs at the U.S. Chamber of Commerce.

Other delegation members said they are encouraged by the opening-up measures adopted by China, and that they will view U.S.-China trade frictions from a long-term perspective. They also voiced opposition to attempts to weaken economic relations with China and an economic decoupling between the two nations.

A U.S.-China Business Council member survey in August showed 97 percent of companies say their China operations are profitable, and the China market is a priority to its significance as a driver of revenue growth.