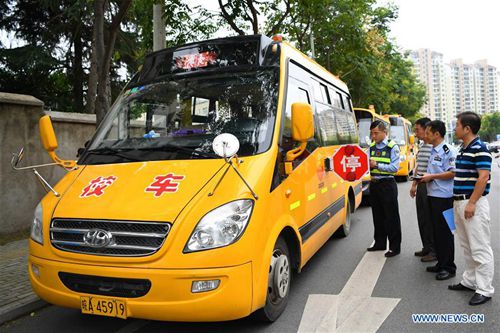 School buses equipped with a monitoring system powered by the BeiDou Satellite Navigation system has hit the road in a Central China city to better protect the students' safety.

Some 183 smart school buses procured and run by the local government began to operate in Chongyang county of Xianning, Central China's Hubei Province from the beginning of the new semester on August 30, local news website xnnews.com.cn reported.

They are dubbed "smart" because they are installed with a dynamic monitoring system powered by the BeiDou Satellite Navigation System, which can monitor whether the school bus is overloaded, exceeds the speed limit or breaks other traffic laws.

A driver safety system on the bus will monitor misbehavior by the driver including smoking, dozing off, making phone calls or loss of concentration. These actions will be recorded and a remote supervisor will be alerted, who will contact the driver in time to eliminate the dangerous behavior.

When students get on and get off the bus, they will need to swipe their cards, which are also connected to their parents' smartphones. With each swipe, the parents will be notified that their children have got on or got off the bus, so that they know the children have not been left behind.

The smart bus also has an infrared life detection system. Once the bus is locked, it will check if there are any vital signs still in the vehicle. If a student is locked in the bus, the system will automatically sound an alarm, take photos and report to a monitoring platform.

China has experienced fatal school bus traffic accidents and tragedies involving children who have been forgotten and locked in school buses.