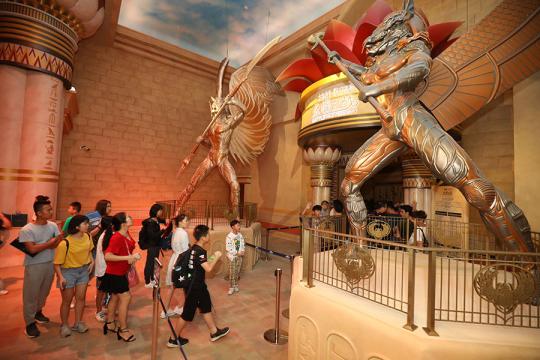 Covering 22,000 square meters, the Lionsgate Entertainment World theme park offers about 30 interactive and immersive attractions to visitors, including a VR rollercoaster that instantly transports riders to ancient Egypt, and a world-first augmented reality motorbike experience themed around the Hollywood blockbuster Twilight. It is touted as "the world's first movie-themed multisensory interactive center".

The opening of the new park has given a boost to Hengqin's push to become a prime tourist attraction in southern China, just months after the State Council, China's Cabinet, approved a proposal to turn it into an island of international tourism.

The tourism-centered approach for the island is part of the much larger Guangdong-Hong Kong-Macao Greater Bay Area strategy and is aimed at the diversification of neighboring Macao's tourism offerings, particularly by providing attractive alternatives to casinos and gaming.

Selena Magill, general manager of Lionsgate Entertainment World, is keenly aware of the opportunities brought on by the Hengqin New Area's unique positioning. She said the park's strategy is to increase the overall attractiveness of Hengqin to tap into the tourist market in Guangdong, Hong Kong and Macao.

Hengqin is already home to the Chimelong Ocean Kingdom theme park, which was the 10th most visited theme park in the world last year, attracting 10.83 million visitors. Rather than viewing Chimelong as a competitor, Magill said the two parks were complementary.

"Chimelong is already doing a wonderful job of bringing in millions of people each year, and we want to become part of that," she said. "I think that Hengqin will become one of the most-visited tourist destinations in China."

Rick Zeng, director of sales and marketing at Lionsgate Entertainment World, said the park is echoing the central government's call to develop the Greater Bay Area. In response, the local government has offered preferential support, including tax incentives and subsidies to the park's developers, Hong Kong's Lai Sun Group.

"We have received a lot of government support to meet the high expectation of building Hengqin into a tourism destination," Zeng said."When we imported all of the equipment from overseas, we received strong support from local customs and local authorities to clear the necessary procedures."

He said the park will also act as a platform for technological talent.

Lionsgate Entertainment World is part of the first phase of Novotown, a 5.45 billion yuan ($762 million) development focused on nongaming tourism.

A total of 18 billion yuan is expected to be invested in the Novotown project, with a total of five phases planned. Executives at Lai Sun say they expect the project will propel Hengqin to become the "Orlando of China".