U.S. should stop slandering China for its own fentanyl problem: MPS official 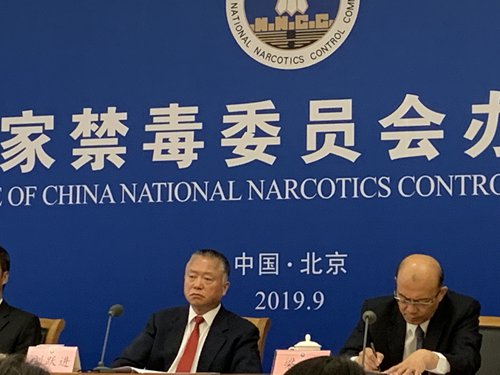 A senior official from China's Ministry of Public Securityurged the U.S. to stop slandering China for its own fentanyl problem, saying that the U.S. has its own culture, policies and companies to blame for the opioid crisis.

China has not found a single case of fentanyl smuggling since it enhanced restrictions on May 1, when all fentanyl-related analogs were added to the country's list of controlled drugs, said Liu.

In recent years, the U.S. has claimed there is evidence that fentanyl has been illegally smuggled out of China and is a major source of the opioid, according to U.S. news reports.

Liu said the increased restrictions on access to fentanyl in China and the rising number of death in the U.S. indicate that China was never a major source of fentanyl in the U.S..

U.S. law enforcement departments reported that from October 2018 to March 2019, 536 kilograms of fentanyl substances were seized and only five kilograms came from China. Authorities made 229 fentanyl-related busts during that time and only 17 involved Chinese smugglers.

Liu said that although China and the U.S. have cooperated on fighting drug smuggling in recent years, the countries have jointly solved only a limited number of fentanyl-related cases. The U.S. has provided Chinese authorities with only six tips relating to illegal fentanyl smuggling in China since 2012, said Liu.

Liu also slammed accusations that fentanyl substances from China arrived the U.S. via Mexico, saying law enforcement departments in those two countries have not provided evidence to support the accusation. "People in the U.S. should not make statements before they examine the facts," Liu remarked.

At the conference, Liu gave a vivid example of how the U.S. is disseminating fake news and blaming China for its own fentanyl problems.

After the news was published, the U.S. Office of National Drug Control Policy (ONDCP) re-tweeted the news saying that "China continues to pour poison into our communities…FINAL DESTINATION: USA."

Law enforcement departments from China, the U.S. and Mexico conducted emergency communication and found the substance was not fentanyl, but another chemical products, said Liu.

Excelsior soon deleted the report, but the ONDCP has not yet deleted its tweet.

Liu urged the U.S. to set aside prejudice and cooperate with other countries to crack down on crimes relating to illegal fentanyl smuggling, rather than smugly pointing fingers and tarnishing another country's reputation.

Liu said the U.S. profit-driven drug makers, who sponsor experts to publish research saying that opioid is harmless, should also be held accountable for the country's opioid crisis.

The other reasons include the U.S. governments' loose regulation on opioid and the U.S. cultural background, which relate taking drugs to "liberty and individualism."

At the Tuesday conference, Liu also introduced other measures China is taking to regulate fentanyl substances, such as deleting fentanyl-related information on websites and ending online distribution of fentanyl. Customs departments have also intensified their efforts to examine goods coming in and out of China.