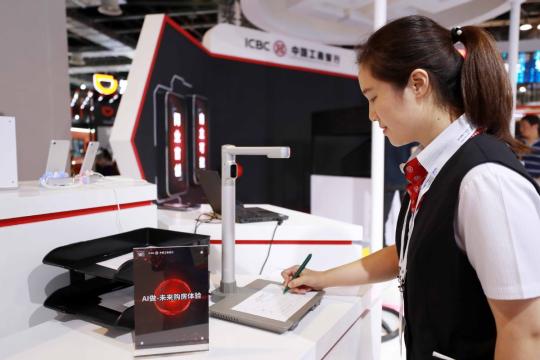 An ICBC employee at the bank's booth during a financial exhibition in Shanghai. [Photo provided to China Daily]

Two of China's large State-owned commercial banks continued to optimize their credit structure and maintained steady growth in corporate loans, which vigorously supported development of the real economy, the part of the economy that produces goods and services.

At the end of June, the balance of domestic corporate loans and advances of China Construction Bank Corp stood at 6.85 trillion yuan ($956 billion), up 5.36 percent from the end of 2018.

Over the same period, the bank's balance of loans to the infrastructure sector increased by 4.31 percent to 3.61 trillion yuan, accounting for 52.71 percent of corporate loans and advances.

Industrial and Commercial Bank of China Ltd also provided more targeted services for the real economy. In the first half, its domestic renminbi loans increased by 851.3 billion yuan from the end of last year.

At the end of June, the balance of loans of ICBC to domestic projects rose by 253.7 billion yuan from the beginning of the year, accounting for 54.9 percent of new corporate loans.

The bank strongly supported key projects including the coordinated development of the Beijing-Tianjin-Hebei region, the integration of the Yangtze River Delta, and the Guangdong-Hong Kong-Macao Greater Bay Area.

The balance of inclusive finance loans by ICBC for small and micro businesses went up more than 40 percent from the start of the year. The balance of loans to private enterprises also rose 7.6 percent over the same period.

"In the second half, we will give greater focus to the needs of key projects related to national welfare and people's livelihoods, and foster new growth drivers for the domestic economy. In particular, we will step up financial support for the manufacturing industry, actively promote transformation and upgrading of this sector, and further strengthen our financing services for private and small businesses," ICBC President Gu Shu said at a news conference on Thursday.

One of the key factors affecting the profitability of CCB and its subsidiaries is an increase in net interest income by 4.57 percent year-on-year due to the growth of interest-earning assets. Net fee and commission income also rose by 11.15 percent during the same period.

"We will see a huge divergence in bank performance in the next three to five years. Banks will innovate business models and develop customer-centric businesses that are driven by technologies, in addition to emphasizing professionalism, synergy and refined management," he said.

Asset quality remained stable for large State-owned commercial banks in the first half, as they pushed adjustments to their credit asset structure and strengthened fundamental credit management to boost their refined management standards.

Liao Lin, vice-president of CCB, attributed the stable asset quality of the bank in part to the establishment of a proactive comprehensive risk prevention, monitoring and management system.