Repositioning targeted, with safety the priority

Effectively managing foreign reserve assets has long been a key challenge for central banks, and China is no exception.

But now, the country, which holds the world's largest foreign exchange reserves, is looking for better ways to keep the vast amount of assets safe and maximize investment returns.

The world's second-largest economy's foreign exchange, or forex, reserves stood at about $3.1 trillion by the end of last month, up by $31 billion, or 1 percent, from the beginning of this year, according to the People's Bank of China, the central bank. Last year, the reserves fell by $67 billion from a year earlier, after rising by $129 billion in 2017.

The reserves stabilized at just over $3.07 trillion, about 24 percent of GDP, by the end of last year, and comprised nearly 27 percent of such assets globally, according to the International Monetary Fund.

Foreign exchange reserves refer to any overseas financial assets held by a central bank and can include bank notes, deposits, bonds, treasury bills and other government securities.

Zhao Qingming, chief economist at the China Financial Futures Exchange's Institute for Financial Derivatives, said: "Safety and liquidity are the two major goals for foreign exchange reserve management in China, with safety being the primary goal. Holding such a huge amount of foreign exchange reserves, it is reasonable that the managers are highly risk-averse, preferring to invest most of the reserves in safe assets."

Some 60 to 70 percent of the nation's forex reserves are held as sovereign debt from advanced economies, as well as financial and corporate bonds with high credit ratings. Other investment targets include equities, bank deposits and financial derivatives, Zhao said.

Supported by the large accumulation of forex reserves, the country has seen stable and fast economic growth in the past four decades, with lower inflation. Thanks to the reserves, China can also benefit from a favorable international trade and financial environment in the long term, Chen Yuan, a former deputy governor of the central bank and former vice-chairman of the Chinese People's Political Consultative Conference, said at a forum on Aug 10.

According to Chen, faced with new challenges, including foreign exchange rate issues raised by the United States recently, the priority is to keep these reserves safe, and strengthen the renminbi's position globally.

Chen sees potential in foreign exchange rate risks, as the majority of China-reserved foreign assets are in US dollars.

Late last month, the State Administration of Foreign Exchange, or SAFE, China's forex regulator, said the country's foreign exchange reserves held in US dollars accounted for 58 percent of the total by the end of 2014, down from 79 percent in 1995.

Among global foreign exchange reserves, assets held in US dollars comprised 65 percent of the total by 2014, up from 59 percent in 1995, according to SAFE's annual report last year.

For the first time, SAFE made public the currency composition of the forex reserves, after first reporting data to the Currency Composition of Foreign Exchange Reserves, or COFER, an International Monetary Fund database, in 2015.

According to COFER, which keeps quarterly data on the currency composition of official foreign exchange reserves, the world's forex reserves reached $11.59 trillion in the first quarter of this year. Some 58.14 percent of the total was in US dollars, compared with 1.8 percent in renminbi. 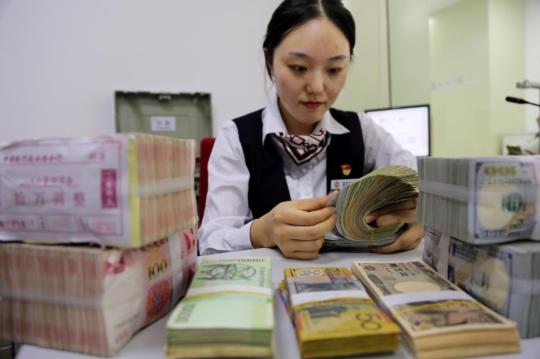 A cashier counts currency notes at a branch of Bank of China in Lianyungang, Jiangsu province. [Photo provided to China Daily]

Zhao said the currency composition of the reserves in China "almost" matches the global trend.

Chen warned that given the large proportion of global reserves held in US dollars, "the US, to some extent, can influence the foreign exchange market through affecting the dollar's value, which could also result in adverse impacts on China amid the escalating trade dispute."

On Aug 5, the US designated China "a currency manipulator". Immediately after the announcement by the US Treasury Department, the dollar and stocks fell sharply and gold strengthened. Fears then rose in global financial markets, triggering increased volatility.

According to economists, forex reserves are usually seen as cushions against drastic fluctuations in foreign exchange rates. The value of the renminbi can be stabilized through selling or buying foreign exchange, and the country's ample reserves can prevent short-term foreign debt risk.

After assessing the situation last year, the IMF concluded in a report that estimates suggested there had been little foreign exchange intervention by the PBOC. The report, issued on Aug 9 in Washington, was quoted by analysts to support China's objection to being labeled a currency manipulator by the US.

"(China's) reserves remain adequate and there were no indications of large-scale foreign exchange intervention despite renminbi depreciation against the US dollar," the report said. "China's foreign currency reserves remain more than adequate to allow a continued transition to a floating exchange rate."

In addition to currency disputes, global investors expect that if the United States Federal Reserve announces more rate cuts in the coming months, it could drive down US dollar-denominated asset prices and weaken the value of most forex reserves.

Yu Yongding, a senior economist at the Chinese Academy of Social Sciences, said the PBOC has suggested allowing a more flexible floating of the renminbi exchange rate, and has continued to push for market-oriented reform of the foreign exchange rate regime.

The central bank should be patient and stick to reform, Yu said, adding that there has been no intervention in the forex market through sales of such reserves for a long time, even though the renminbi may be under depreciation pressure amid global monetary easing.

According to SAFE, the major task for foreign exchange management this year is to enhance midand long-term asset allocation and optimize and adjust investment strategies.

Xie Yaxuan, chief analyst at China Merchants Securities, said there is a global trend where countries with large holdings of reserves tend to focus on long-term and relatively stable investments, such as infrastructure construction, to hedge against potential fluctuations in bond and equity markets.

"A shift toward using domestic currency is another trend," he added.

Profitability is generally accepted by the world's major central banks as the prime objective for reserve management, in addition to safety and liquidity. The emphasis on the return objective has generally increased over time, according to experts.

SAFE said in its annual report that China had achieved a 10-year return rate of 3.68 percent on average on its foreign exchange reserve investments from 2005 to 2014.

Wang Chunying, a spokeswoman for SAFE, said the investment return rate was at a relatively good level compared with those of global peers.

"China's forex reserve currency structure is diversified, even more diversified than the global level on average," Wang said. "It is in line with the requirements of China's economic and trade development, as well as the demand for international payments."

Prospective returns on China's vast foreign exchange reserves are likely to remain stable at more than 3 percent, and the regulator is optimizing investment strategies this year to increase asset values and reduce the adverse impact of foreign exchange rate fluctuations, according to economists.

Zhao, from the China Financial Futures Exchange, said it is also a trend for global monetary authorities, including the PBOC, to increase gold in their reserve portfolios to prepare for any shocks resulting from financial risks and foreign exchange rate fluctuations.

The amount and structure of the country's foreign exchange reserves are changing dramatically, along with the global and domestic economic development situations, economists said.

From 2000 to 2014, a significant amount of global capital went into emerging market economies, resulting in a surge in foreign exchange reserves, from $154.7 billion at the start of 2000 to a record high of $3.99 trillion in June 2014, representing an annual increase of more than 26 percent.

Since July 2014, along with outflows of global capital from emerging market economies, China's forex reserves have dropped gradually, according to SAFE.

To manage forex reserves of more than $3 trillion, SAFE set up a special investment entity－the SAFE Investment Center－which is responsible for operating and managing the foreign exchange and gold reserves.

The center has five offices for offshore investments: Singapore, (under the name Huaxin); Hong Kong, (Hua'an); London, (Huaou); New York, (Huamei); and Frankfurt, according to SAFE. These offices form a global network, which can operate round-the clock.

According to a former SAFE official, these overseas offices have "special missions" for investing the reserves, but little information about their detailed investment strategies can be disclosed due to security issues.

Diversification and decentralization are the priorities for China's foreign exchange reserve strategy, according to the SAFE annual report last year. "Putting such a large bulk of reserves into different baskets, and building optimized asset portfolios, can hedge risks and secure the assets' value and profit," the report said.

To better control potential risks, SAFE has introduced "counter-cyclical" policies to prevent adverse situations arising. According to the report, the major risks are listed as "credit", "market", "liquidity" and "operational".