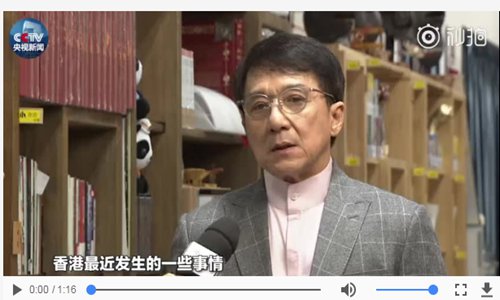 Actor Jackie Chan said he was "sad and worried" about what is going on in Hong Kong. "Hong Kong is my hometown and China is my motherland. I love them and I hope Hong Kong could return to peace as soon as possible," Chan told China Central Television on Tuesday. (Photo/Screenshot of CCTV interview)

Along with the escalation of violence in the Hong Kong Special Administrative Region including the brutality on a mainland tourist and reporter at the airport, celebrities from the Chinese mainland and the city condemned the riots and expressed their support for the Hong Kong police.

Actress Liza Wang Ming-chuen and 15 others from Hong Kong culture community on Thursday signed a statement condemning the violence from the rioters and calling for rule of law.

Violence broke the bottom line of a civilized society and would lead to social chaos, Hong Kong newspaper Ta Kung Pao quoted the statement as saying on Thursday.

Hong Kong society, rooted in traditional Chinese culture, has valued rational expression, inclusiveness and the rule of law, which is the basis of a stable and prosperous Hong Kong, the statement said.

The statement called for Hong Kong people to collaborate to restore social order and seek a path of development.

Chinese mainland analysts pointed out that celebrities usually tend not to get involved in political issues, but at this moment some have chosen to stand up to defend social order.

Fan Peng, a member of the Chinese Association of Hong Kong &Macao Studies, told the Global Times that such a point of view reflects the majority of Hong Kong residents long for the society and their lives back to normal.

"This is the moment that celebrities, whose voices are heard by a large group of people especially among youngsters, take the responsibilities to call for the rule of law in order to protect Hong Kong and the motherland," Fan said.

After the airport violence, Hong Kong-born idol Ting Fei-chun posted on Instagram, "I support Hong Kong police, now you can beat me. What a shame for Hong Kong."

Jackson Wang, a member of K-pop band GOT7 who was born in Hong Kong, also joined an online campaign guarding the Chinese national flag after rioters insulted the flag.

Kung fu actor Jackie Chan said he was "sad and worried" about what is going on in Hong Kong. "Hong Kong is my hometown and China is my motherland. I love them and I hope Hong Kong could return to peace as soon as possible," Chan told Chinese mainland state broadcaster China Central Television on Tuesday.

Hong Kong-born singer-actress Miriam Yeung Chin-wah denied herself a secessionist and expressed her love for China and Hong Kong.

"Yeung has always embraced the Basic Law and upholds that Hong Kong is an inseparable part of Chinese territory," according to a statement posted by Yeung's company on China's Twitter-like Sina Weibo platform.

In June, Yeung was swirled in rumors she was pro-separatist for liking an instgram post by anti-mainland singer Denise Ho. Four days later, Yeung said her account was stolen.

Celebrities from the island of Taiwan including actress Ouyang Nana who has 16 million followers on Weibo and former Wanna One member Lai Kuan-lin also condemned the violence and supported Hong Kong police.

K-pop band EXO member Zhang Yixing and actress Li Bingbing were among the many mainland celebrities who denounced the rioters and expressed their love for China.