Mulan-style makeup in vogue on the internet 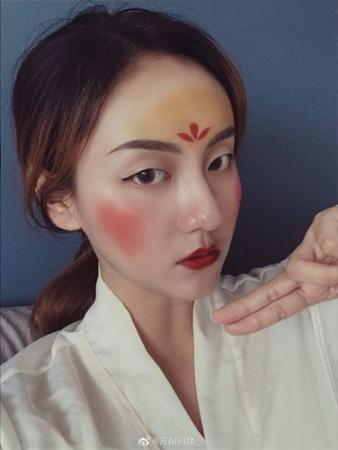 A soon-to-be-released movie about the ancient Chinese heroine Mulan, is inspiring women to try creative new looks in their makeup.

With heavy rouge on both cheeks and a streak of light yellow and tiny red flower on the forehead, the female characters in the trailer are leading some netizens to believe this was the actual style of women's makeup during the Northern and Southern Dynasties (AD386-589 ).

Many Chinese Net users are posting photos of themselves or their children wearing Mulan-style makeup.

"Mulan-style makeup is really good-looking, I am the most fashionable girl in my residential area with the makeup," a Net user wrote after posting nine narcissistic selfies.

Some users are posting how-to videos teaching others how Mulan-style makeup should be applied.

The story of Mulan comes from an ancient tale of a heroic young woman who disguised herself as a man so she could take her aging father's place in the army and fight against northern invaders.

The first animated adaption of Mulan's tale was released in 1998 by Disney, and became a classic that many young people across the world born in the 1990s hold as a fond childhood memory.