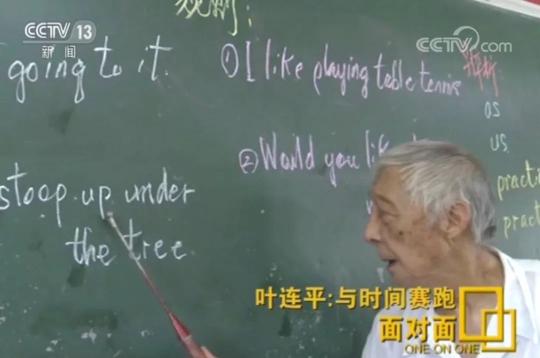 A 92-year-old retired teacher from Buchen village remains busy over the summer vacation in East China's Anhui province, giving lessons to the children who are left behind as their parents seek out jobs in other cities.

This is the 19th summer since Ye Lianping first began teaching children Chinese and English free of charge. Up to now, he estimates more than 1,000 children have attended his lessons.

Most of the young parents from the village where Ye lives are migrant laborers who have no choice but to leave their children at home despite potentially risking their chidren's safety and a lack of parental control.

Ye sympathises with and directly understands the dilemma of these young parents, and decided to offer his help.

Although originally a Chinese teacher, he took advantage of his English skills developed when he was young to also provide a second language education for the children. He has adopted a systematic study of English textbooks and divided the children into different ability levels for targeted teaching.

Most remarkably, over the past since 2000, he hasn't taken a single payment from students or their parents - nor does he mind. Ye believes that although he may not be rich financially, he is living a rich spiritual life.

Yet his generosity does not stop at simply teaching local children. He has donated over 10,000 yuan to a post-graduate student newly admitted to Nanjing University of Science and Technology. Over the past 19 years, he has spent over 300,000 yuan on the children - almost all of his savings.

"Education is like farming; you simply need to plant the seeds. It's a good thing you do, without thinking too much about its benefits," said Ye.

In 2012, he set up the Ye Lianping Scholarship Fund using his own money as well as donations from the local government and society. So far, it has subsidized 132 students of outstanding performance with financial difficulties.

Ye has no children of his own, leading a simple life with his wife. The bungalow he inhabits has more than 30 years of history, and to further help, he sometimes let children far away from home spend the night there.

Yang Hongyan, a student supported by Ye in the early days, is one of the students that has boarded at his place. Although she stayed there for a whole year until admitted to high school, Ye insisted on refusing the money from her parents.

"Without grandpa Ye's help, I may have dropped out of school like most of my classmates, or may have even been led astray," said Yang.

Ye is racing against time to enlighten the future of more rural children.

In the summer of 2018, Ye was injured while riding a bicycle. Although asked to rest in bed for 100 days following the accident, he discharged himself from hospital in merely four days after an operation and hurried back to the children, who were later deeply moved.

"This is exactly what education should be like. Teaching is just a means of education. Its ultimate purpose is to teach students how to become better people," said Ye.

Now in his 90's, Ye cannot ride a bicycle anymore; but he still keeps teaching for five hours every day - three hours in the morning and two in the afternoon. He thinks his time is limited and as much of it as possible should be spent on the children.

Born in Qingdao, East China's Shandong province, Ye came to Buchen village unexpectedly, and chose to stay because the villagers once helped him when his life was extremely difficult.

"As the Chinese old saying goes, a drop received in need will be repaid with a whole river, that's why I chose to stay. Besides, the children in the village need me," said Ye, adding that the poor quality of rural education and the lack of volunteer teachers in rural areas are what concerns him the most.

Fortunately, an increasing number of volunteers from different colleges have been influenced by Ye and come to teach children English, mathematics, and physics.

Ye cherishes such opportunities and hopes the children can learn more about the outside world and have their own dreams.

He also hopes to spare no effort fulfilling his duty as a teacher, saying he'd rather die on the podium than in bed.