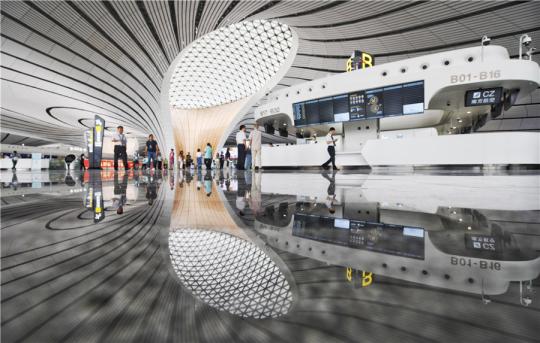 Staff members and people posing as passengers walk in the terminal of Beijing Daxing International Airport on July 19 during a test of the airport's operations. The airport will open on Sept 30. （TAO RAN/FOR CHINA DAILY）

Construction of Beijing Daxing International Airport has been completed after five years of frenzied activity. When the mega-airport begins operation on Sept 30, it will be the world's largest single-terminal airport at 700,000 square meters - the size of 98 soccer fields.

The 80 billion yuan ($11.7 billion) facility, which is 46 kilometers south of downtown Beijing, will serve as a second international airport for the capital. It is designed to relieve the pressure of rising demand for air travel on Capital International Airport in northeastern Beijing.

In barely seven decades, China has transformed from a nation with a handful of shabby, makeshift airports to being home to aviation superhubs - the result of the country's rapid economic development and greater openness to the outside world.

According to the Civil Aviation Administration of China, there were 36 airports in 1949, most of which could handle only small aircraft. The number had soared to 236 by the end of June, with about seven new airports coming online each year in the past decade.

Beijing Capital International Airport, the first airport for commercial flights after the founding of the People's Republic of China in 1949, featured just one 2,500-meter runway when it opened in 1958, and had a terminal covering about 100,000 square meters.

"Even during peak time, the airport was only able to handle fewer than 250 passengers per hour, most of whom were government officials," said Liu Zhaolong, a consultant with the China Civil Airports Association, adding that ordinary citizens at that time had to buy tickets to visit the airport.

Last year, the airport, which now has three terminals but is hitting full capacity, handled more than 100 million passengers, making it the second-busiest in the world after Atlanta's airport.

China has been gearing up to boost its general aviation industry as the country undergoes a huge expansion into the world of flying, with an increasing number of Chinese taking to the skies.

"A burgeoning domestic market has been a major force of the growth, but the overseas routes' impressive increase has also pushed the booming industry," Zhang said.

China has built an international air network with 844 routes, connecting 167 cities in 61 countries. It has also signed intergovernmental civil air transportation agreements or established civil aviation connections with 125 countries and regions, according to the administration's statistics in September last year.

"Historically, China's domestic market dwarfed international services, but airlines have been rapidly stretching their wings in the past decade, thanks to the country's reform and opening-up policy, as well as people's soaring outbound tourism demands," said Li Xiaojin, a professor of aviation economics at Civil Aviation University of China in Tianjin.

According to the International Air Transport Association's forecast, China will become the world's largest civil aviation market by 2024-25, and the air passenger volume in the Chinese market is expected to reach 1.6 billion by 2037.

Li Xunlei, chief economist for the financial institution Zhongtai Securities, said in a report that about 1 billion Chinese people have never boarded a plane, which serves as strong evidence that the country's current airports will not be able to meet demand in just a few years. China must step up its efforts to renovate existing facilities and build new airports, the report said.

Dong Faxin, the director of the administration's Development and Planning Department, said in a civil aviation development guideline issued in December last year, "Service has improved substantially, but existing airports are far from adequate and are unevenly distributed throughout the country."

According to the guideline, China aims to build more than 200 additional airports in the next two decades and is expected to have a total of around 450 by 2035.

It also said world-class airports will be built in the Yangtze River Delta region, in the Beijing-Tianjin-Hebei region, in the Guangdong-Hong Kong-Macau Greater Bay Area and in the Chongqing and Chengdu city cluster.

Ouyang Jie, a professor who specializes in airport studies at Civil Aviation University of China, said China's provision of airports per capita is currently much lower than in the United States or Europe.

"These regions in China, which are highly populated but count on a few airports to handle huge passenger traffic, are in urgent need of their own pivotal air traffic hubs for sustainable development," he said.

Chengdu Tianfu International Airport, for example, is expected to begin operation in 2021. The second aviation hub, which will make Chengdu the third city on the Chinese mainland with two airports, after Shanghai and Beijing, will take the pressure off the overcrowded Chengdu Shuangliu International Airport.

"New airports should also be built in China's west, where there are fewer facilities so far," he added. "The construction of the airports will better facilitate the economic development in the remote and less-developed areas."