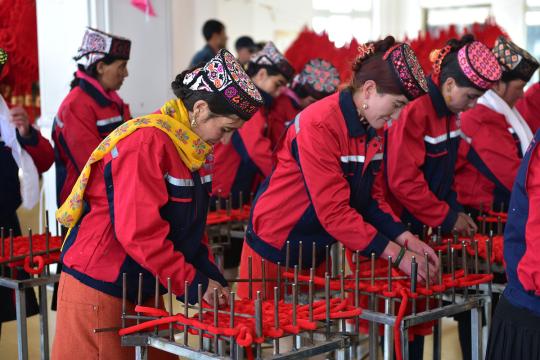 Impoverished residents of bleak backwaters in Tashikurgan Tajik autonomous county have been relocated to Tati Kuli, a government-supported settlement that offers better conditions for farming and higher standards of education and healthcare.

In the rural areas, people's lives were frequently disrupted by natural disasters, while the barren land, low levels of education and poor medical facilities made it difficult for them to escape poverty, according to the local government.

"I used to live in a shabby house, whose weak structure made it unsafe in bad weather. Also, we had to collect water from a river, which usually took about two hours for a round trip," said the 25-year-old who used to live in the county's Ma'eryang town.

"Our lives have improved a lot. We now live in a clean house with free electricity and fresh drinking water," she said. "Our income has also risen since my father and I joined the border patrol team. We also do some handicraft work and plant highland barley with the help of the government. Last year, our income was about 60,000 yuan."

Long Xinxin, director of Tati Kuli settlement, said the relocation campaign was completed in May.

"Investment of 150 million yuan has been channeled into the campaign for infrastructure construction, such as houses, kindergartens, clinics and entertainment facilities," he said.

According to Long, the settlement boasts collective land, where the locals can plant highland barley, and handicraft workshops, where they can earn extra income by making Chinese knots.