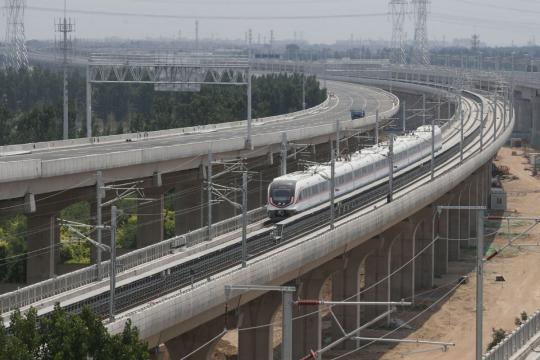 The first phase of a new subway line connecting downtown Beijing to the new international airport under construction south of the city saw its first test run on Saturday, indicating that preparations for the opening of Beijing Daxing International Airport in September are in full swing, according to local officials.

The rail transit line, designed to link the new airport in Daxing district and Caoqiao subway station in Fengtai district, spans 41.4 kilometers and passes through three subway stations in the capital. The train can reach speeds of up to 160 kilometers per hour.

Construction work at Beijing Daxing International Airport is expected to be completed by the end of this month, according to the Civil Aviation Administration of China. It will enter commercial operation before Sept 30.

The new airport, which is located at the junction of Beijing's Daxing district and Langfang, a city in neighboring Hebei province, is designed to take pressure off the overcrowded Beijing Capital International Airport in the northeastern suburbs.

"Operation of the new airport subway line means a lot to the capital's rail transit system, since it increases the average speed of urban rail transit in Beijing and will further boost the economic development of the Beijing-Tianjin-Hebei region," Yang said.

The top speed of most subway trains in Beijing is currently around 80 km/h, he added.

When the subway goes into operation, the 40-km journey from the city's south Third Ring Road at Caoqiao station to the terminals at the new airport will only take 19 minutes, said Jiang Chuanzhi, designer of the new airport line.

He said the trains have a business-class carriage, six regular carriages and one for luggage, with each carriage about 22.8 meters long and 3.3 meters wide. Each train will be able to carry up to 1,500 passengers.

Four elevators and two escalators will be installed at each station along the line, Jiang said.

There are wheelchair spaces and USB charging ports next to the passenger seats on the trains, which are also equipped with variable-frequency air conditioners and LED lighting systems to save energy.

According to the capital's railway corporation, the airport subway line was designed as part of the city's first three-layer cluster of transport infrastructure, with the subway line and an expressway above ground and a gas pipeline underground to fully use the space available.

When the new airport in Daxing opens, it will increase the area of terminal facilities in Beijing by 700,000 square meters. The airport will have four runways and 268 parking bays, which will be able to accommodate 620,000 flights a year.