Old mining site transformed into a green spot for tourism 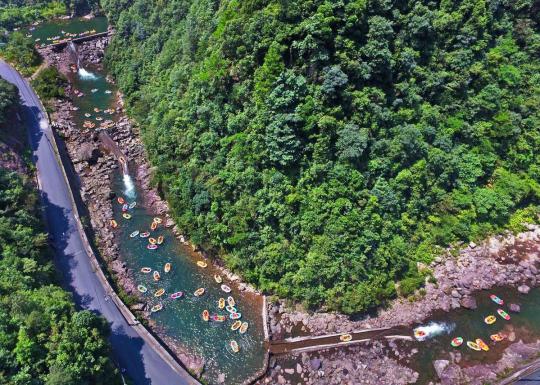 The 30,000-square-meter quarry in Yucun village, Zhejiang province, was often bemoaned as a "scar" by local residents, a reminder of the village's reckless pursuit of economic growth from mining in the 1990s.

But village director Yu Xiaoping and his predecessors had a vision of turning the quarry into a landmark, appealing to a growing number of tourists as an unusual landscape with an interesting history.

Sitting at the foot of Tianmu Mountain, famous for bamboo forests towering to dizzying heights, Yucun in Anji county was once renowned for its strong economic development derived from its natural resources. At its peak in the mid-1990s, the remote village with a population of only 1,000 people in 280 households, boasted an average annual per capita income of 3,000 yuan ($434), nearly the equivalent of the provincial capital Hangzhou.

But environmental protection had been sacrificed at the altar of economic growth. By the end of the millennium, pollution was so pervasive that villagers ignored the weather forecasts, as "the sky was always gray regardless of whether it was sunny or cloudy".

In 2003, the village director decided to put a halt to reliance on the "stone economy" - three mining companies and a cement factory that contributed 95 percent of the village's income.

Two years later, President Xi Jinping, then Party secretary of Zhejiang province, praised the decision during an inspection trip to the village and said "clear waters and green mountains are as good as mountains of gold and silver". Known as the "Two Mountains" theory, the dialectic notion has since proved an important guide for both rural and urban areas in China, as the country seeks high-quality economic growth and undertakes its global commitments on ecological protection and development.

At Yucun, which is now renowned as the cradle of the theory, clear rivers and lush mountains not only promise a better livelihood for residents, but also stand out as a rural attraction for city-dwellers from the likes of Shanghai, Hangzhou and Nanjing.

"They were not quite sure of the decision until the encouraging message from President Xi," said Yu, the village director who formerly worked on the village's auditing team.

Yucun, along with several other villages in the province, has been promoted as an exemplar of China's recent rural revitalization. Yu said the local government has been reassured by the "Two Mountains" theory and has pioneered efforts to direct its economy to the more ecologically friendly sectors of agriculture, industry and tourism.

The pursuit of the rural vitalization strategy is an important plan implemented by the Central Committee at the Communist Party of China's 19th National Congress.

In 2018, Yucun received upward of 800,000 visitors from across the country, who spent more than 30 million yuan, accounting for nearly a third of the village's income. The village's other sources of income come from bamboo products and renting out vacant land and factories.

With about one fifth of its population engaged in the tourism industry, the average annual income per person has increased fivefold from 2005 to 2017, surpassing 41,000 yuan. The figure is three times the national average income in rural areas.

"Everyone called me crazy and said my investment would be a stone thrown into the river (with no return)," said Pan Chunlin, a villager who was one of the first residents to join the tourism industry early in the 2000s.

With a loan of 600,000 yuan, Pan refurbished three rooms reserved for his wedding into guest rooms.

A former truck driver at the cement factory, he was promoted to the job of chauffeur for the factory's director. The 48-year-old said traveling with the factory director broadened his vision and ambition.

Today, Pan is a millionaire and has expanded his business into a travel agency connecting more than 300 hostels run by farmers in the Yangtze River Delta region, and running a transportation company for tourists, two restaurants, several hostels and a resort.

"As urbanites reach a certain level of income and sophistication, there is a natural desire to return back to nature," Pan said.

As the local government seeks investment for the rehabilitation of the quarry to lure more tourists, Pan quips that he is now troubled with the same kind of problem as urbanites - being too busy.