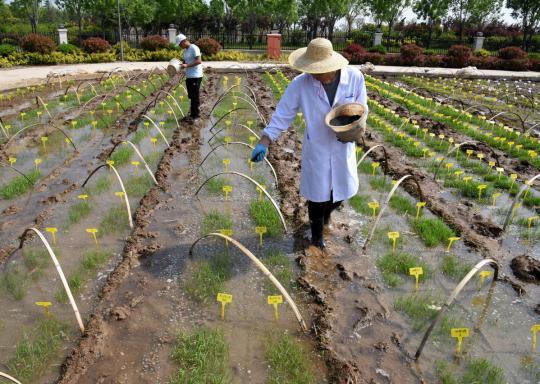 China has planted about 300 new strains of saltwater-tolerant rice on 670 hectares of experimental alkali fields in search of resilient, high-yield varieties that can grow on previously unproductive land.

Qualified varieties will then be promoted for commercial cultivation nationwide, covering about one-fifth of the 100 million hectares of saltwater soil that is believed to have potential for rice cultivation in the country, according to the Saline-Alkali Tolerant Rice Research and Development Center in Qingdao, Shandong province.

This year, the center plans to submit the first group of seven marketable rice strains to the Ministry of Agriculture and Rural Affairs for evaluation, Zhang said. If certificates are obtained, the strains will be promoted for large-scale cultivation nationwide.

Areas for trial planting, which are expected to exceed 1,300 hectares by year's end, include five types of land with heavy salt content. They are located in Heilongjiang, Shandong and Shaanxi provinces and in the Xinjiang Uygur autonomous region, he said.

Preliminary tests with different strains have already demonstrated stark contrasts in average yields, Zhang said. For instance, crops planted in test fields in Qingdao are capable of yielding about 10 metric tons per hectare in one harvest year, compared with 3.1 tons per hectare in stretches of salty-alkaline land in Daqing, Heilongjiang province.

"Several factors have led to lower yields, such as the impact of natural disasters. Also, some varieties are simply incompatible with the local environment," he said.

One barometer for determining if a new strain of rice has the potential for mass cultivation is its average output, which needs to be about 4.5 tons per hectare, Zhang said.

"We will further improve our plant breeding and protection methods while strengthening precautions against inclement weather and natural disasters," he said.

"Eventually, we aim to sort out high-yield varieties with stress resiliency designed for salty-alkaline land," he added.

The vast swaths of test fields will also provide insights into how to utilize new technology to boost productivity while cutting down on the use of water, fertilizers and pesticides, said Liu Lin, chief engineer at the center.

"Most salty-alkaline land is in less-densely populated regions. A shortage of labor, coupled with remote distances from abundant freshwater, prompted us to develop intelligent tools and automated machinery to increase efficiency."

In November, the center, in collaboration with telecom giant Huawei, launched a platform that uses big data, the internet of things and cloud computing to offer smart monitoring of salt content in the soil.

The system is also able to collect comprehensive data on changes in the environment and early signs of disease outbreaks or pest infestations, and transfer such information to agricultural experts for analysis and decision-making.

Dubbed the nervous system of smart agriculture, the system has been installed on experimental farmland in Shandong and will soon be rolled out across all test fields, Liu said.

Efforts to transform barren salty land into fertile rice paddies have been going on for at least three decades in China.

In recent years, dozens of research institutes, including the Hunan Hybrid Rice Research Center and the Jiangsu Academy of Agricultural Sciences, have joined the mission. Together, they formed a cooperative alliance dedicated to establishing standards applicable to seawater-tolerant varieties.

Zhang said the center is planning to establish international research and promotion centers in Africa and the Middle East in the near future. A handful of countries, including Ghana, Nigeria and Pakistan, have expressed interest in deeper cooperation with Chinese agricultural researchers in rice cultivation.