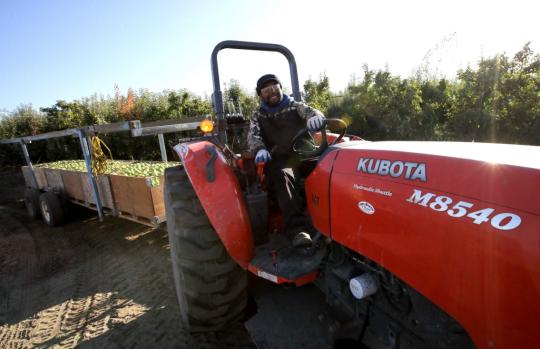 A farmer in the U.S. state of Washington transports apples, which are popular on China's e-commerce platforms, in this file photo. (Photo/Xinhua)

The U.S. should not blame other countries for its unbalanced trade, which is actually caused by its own economic structure and policies, experts said on Wednesday.

U.S. has also gained from globalization and the argument of U.S. politicians that the country has seen its interests damaged by its trade with China does not hold water, economists said.

Their comments came after the U.S. Trade Representative and the U.S. Department of Treasury responded to the white paper China issued on June 2, accusing China of pursuing a "blame game misrepresenting the nature and history of trade negotiations" and causing "unsustainable trade deficits" of $420 billion last year and "severe harm to American workers, farmers, ranchers, and businesses."

"In the short term, a country faces trade deficit when its domestic consumption has outsized its production capacity, meaning that it has been consuming more products than it could produce," said Li Yang, a former deputy head of Chinese Academy of Social Sciences, at a seminar held at the academy.

But long-term deficit could cause problems, Li said. As the import deals are made using the U.S. dollar, the trade deficit of the U.S. means de facto debt it owes to exporting countries on its ledger. For the U.S., the issuer country of the world's major reserve currency, however, all it can do is to simply print more money to pay its debt, Li added.

"The U.S. has been using its role as the world's biggest economy to form a global economic and financial governance system it dominates, gaining huge benefits from it," Li said. "It is either due to ignorance or malicious intentions for the U.S. to ignore its monetary hegemony and complain about how it has been losing in trade."

In 2018, the U.S. trade deficit amounted to $621 billion, the highest in 10 years, according to Commerce Department data. While the U.S. government has blamed other countries' unfair trade practices for the country's pile-up of trade deficits, many economists, including those from U.S.-based institutions, pointed out that the U.S.' own low savings rate and pro-finance economic structure, which features outsourcing of manufacturing to developing countries, should be blamed.

Turning a blind eye to the nature of its own economic structure, the U.S. administration has blamed China for its trade deficit and imposed additional tariffs on Chinese exports, which has led to a 9.7 percent yearly drop in China's exports to the U.S. in the first four months of 2019, data from China's General Administration of Customs showed.

Early in May the U.S. further dialed up the additional tariff on $200 billion worth of Chinese exports from 10 percent to 25 percent.

As China took countermeasures to U.S. tariff hikes, U.S. exports to China have also dropped for eight months in a row, according to GAC.

Wu Baiyi, director of Institute of American Studies at the CASS, also pointed out that instead of facing the problem within its own industrial structure, the U.S. government has wrongfully decided to blame its trade partners.

"The U.S. has been benefiting from globalization, as a result, it has caused the change in its industrial and economic structure," Wu said. "The lower end, even some medium and high-end manufacturing jobs have been outsourced to East Asia, thus the U.S. industries and investors as well as consumers have benefited greatly from the relatively lower labor cost in those regions."

"The lower-end labor of the U.S. has had to bear the consequence," he said. "The manufacturing sector of the U.S. has failed to catch up with its economic expansion, which has caused job losses and the deteriorating social divergence."