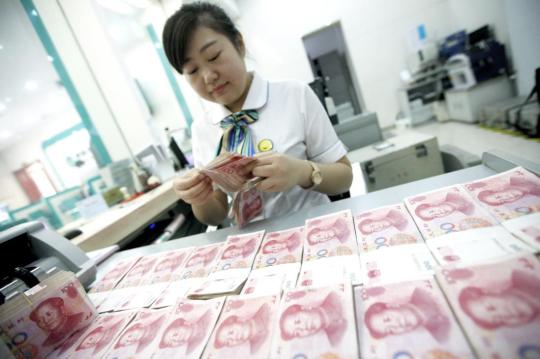 The People's Bank of China will streamline the lending interest rate system to further reduce borrowing costs for small and micro enterprises, the central bank said in its quarterly monetary policy report.

At an opportune time, the PBOC will identify a new policy interest rate and no longer post the benchmark deposit and lending rates, thus doing away with the existing "two-track" interest rate system, said Wei Hairui, a researcher with the PBOC's financial research institute.

A streamlined lending rate system will promote competition among financial institutions and enhance their ability to value risks and reduce risk premiums, the central bank said.

The PBOC has blamed the coexistence of regulated benchmark rates for deposit and lending, and the market-decided rates, as the main stumbling block for channeling cheap capital into the real economy, especially to support private and small companies.

The current one-year lending rate is 4.6 percent, unchanged from August 2015, while the one-year deposit rate is 1.75 percent. These benchmarks are widely used by commercial banks as the basis for their financial product pricing models.

The central bank created the Shanghai Interbank Offered Rate, or Shibor, in 2007, which is a no-guarantee and wholesale interest rate. The PBOC has tried to develop it as market benchmark rates, but has not made much headway as the use of Shibor is still limited.

The inefficient interest rate system has constrained the monetary policy's efforts to stabilize economic growth, especially when exports are facing challenges, said economists, although the previous cuts in reserve requirement ratios have fueled an economic rebound in the first quarter.

The PBOC issued a document on Tuesday lowering the rural commercial banks' RRR to 8 percent by July 15, through three cuts of 1 percentage point each every month starting from May. The released funds need to be used for lending to private and small companies, the document said.

Small banks that can satisfy additional conditions can further reduce the RRR to 6.5 percent, the central bank said.

Once this is implemented, the RRR for most rural commercial banks will be reduced to the bottom level in the three-bracket framework. The top ceiling is for large banks at 13 percent, while the middle level with an 11.5 percent ceiling comprises largely of joint-stock and city commercial banks, it said.

"We may see more measures for interest rate reforms in the coming months, although transition from the regulated benchmark rates to market-based benchmark rates also relies on the pricing capability of lenders, which is probably not easy to achieve in a short period," said Li Zhennan, an analyst with Goldman Sachs.

China's interest rate reform was seen as the most crucial and fundamental measure that could reshape the whole financial pricing system in China. The reform has been going on for quite some time, starting from the 1990s, still without a final and "real" liberalization in the system.

"But it is not the right time now," said Sheng Songcheng, former director of the central bank's Survey and Statistics Department. The reform should further progress in a relatively stable period for economic and financial development, because it is hard to foresee the consequences of the "big move", according to the former PBOC official.

The Chinese financial market has seen fluctuations recently especially after rising China-US trade friction. The foreign exchange market and onshore stock prices have been volatile due to the negative messages.

In October 2013, the central bank created a market-based pricing mechanism, which allowed commercial banks to report rates for loans, named as the "loan prime rate" or LPR. It is similar to the prime rate in the United States.

Some policy watchers said the LPR could be a choice to anchor the lending rate in an interim period, right after the central bank abandons the one-year benchmark rate.

"The LPR is well recognized by the market so far, and it has become an important reference for financial institutions to set up the loans' interest rate," said the PBOC.