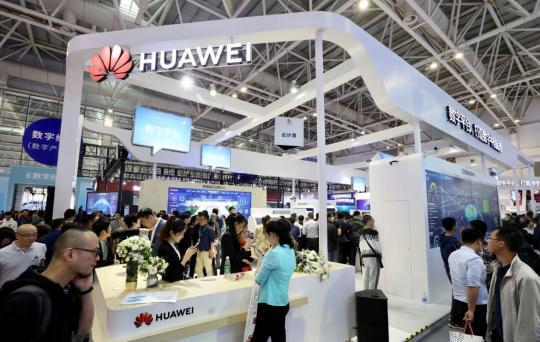 Attendees visit the Huawei booth at the Second Digital China Summit &Exhibition in Fuzhou, capital of Fujian Province, on May 6. [Photo by Zhu Xingxin/China Daily]

The company said its database, GaussDB, is the world's first AI-native database and it can boost the overall performance by over 60 percent compared with traditional products in the same field. It can work on both private and public cloud platforms to offer data services in sectors like finance, automobiles and logistics.

"Huawei offers not only hardware products but also software, as we believe that the latter is our core competitiveness in the information and communication technology field," said Wang Tao, Huawei's executive director and president of ICT Strategy& Marketing.

Citing that 70 percent of its 90,000 research and development staff are doing related software work, Wang said that the firm aims to "empower more companies and industries to accelerate intelligent transformation through data infrastructure deployment".

Analysts pointed out that Huawei's new software push will boost its enterprise-level businesses like cloud computing and further supplement the fast-growing telecom business, which accounted for 40.8 percent of its total revenue last year.

"Huawei has been striving to expand its business scope to better adjust to the global market changes and investing a lot on core technologies to bolster its core competitiveness and gain an edge globally," said Xiang Ligang, director-general of the Information Consumption Alliance.

The move comes close on the heels of Huawei Chairman Liang Hua's statement that the company was willing to sign agreements with governments to ensure that there were no "back doors" in its equipment.

Speaking at a conference in London, Liang said that Huawei was willing to sign "no-spying" agreements with governments, including the UK government, to reiterate its commitment of making equipment that have no backdoors.

"Political and economic friction between nations is a long-term factor that negatively impacts the global economy, and hence not good for customers in all countries," he said.

At the product launch event on Wednesday, Wang reiterated that Huawei "does not own any data," but only provides technologies that support data processing and transmission.

Cybersecurity challenges are not exclusive to any single company or country and any behavior to label a company or a country with such allegations is not rational, he said.

"Changes in any single country will only have a minor influence on Huawei's global business," he said.

In the first quarter of this year, the Shenzhen-based company posted revenue of 179.7 billion yuan ($26.8 billion), up 39 percent on a yearly basis.