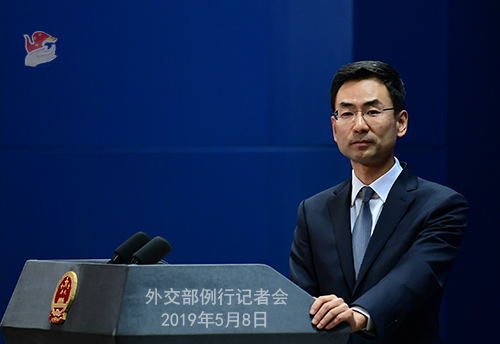 Foreign Ministry spokesman Geng Shuang made the comment on Wednesday after the House voted to pass a nonbinding resolution reaffirming the U.S. commitment to Taiwan. It also backed the so--called Taiwan Assurance Act of 2019, which supports Taiwan increasing its defense spending.

The legislation states that Washington should conduct "regular sales" of "defense articles" to Taiwan and back its participation in international organizations.

"We urge the U.S. side to keep its promise, abide by the one--China policy and the three joint communiques, and block the bill's progress," Geng said.

He urged the U.S. to "appropriately handle the Taiwan question to avoid serious damage to Sino-U.S. cooperation in key areas, and the peace and security of the region".

Experts said the bill will further damage Sino-U.S. relations, and the confrontational approach taken by the U.S. against China will damage regional peace and security.

Yuan Zheng, director of U.S. foreign relations research at the Institute of American Studies under the Chinese Academy of Social Sciences, said the recent passage of U.S. naval vessels through the Taiwan Straits, arms sales and political support to Taiwan are meant to help Taiwan separatists and pressure Beijing.

"China has exercised great restraint and goodwill in trying to maintain stable relations with the U.S.," he said.

Li Haidong, a professor of U.S. studies at China Foreign Affairs University, said Washington has pushed a hard line in relations with Beijing in recent years.

"The Taiwan question is much more complicated and nonnegotiable," Li said.

"If the U.S. side continues to misinterpret the one--China policy, it will irreparably damage Sino--U.S. ties," he warned.

The U.S. Senate will have to vote on the act before it can become law. The time of the vote is unknown.

"The consensus among U.S. officials is to be tough on China, and room for rational options is rapidly shrinking as overconfidence and rash actions become the new norm," he said.