Development of civilian-use nuclear technology a new direction of research 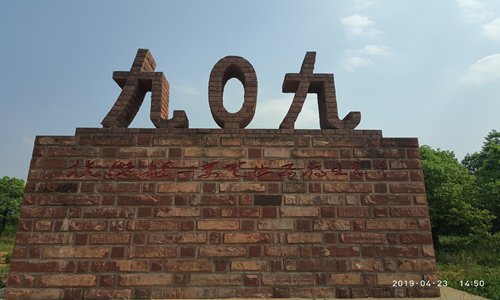 The mysterious 909 base, where China's first-generation nuclear-powered submarine was developed (Photo: Zhang Haichao/GT)

The mysterious 909 base, where China's first-generation nuclear-powered submarine was developed, was recently opened to visitors for the first time.

The Global Times reporter entered the base on April 23, as the People's Liberation Army Navy celebrated its 70th anniversary.

The visit of science fiction writers to the 909 base was organized by the State-owned Assets Supervision and Administration Commission of the State Council and several media and social platforms, including the Global Times Chinese website huanqiu.com and Sina Weibo.

In the mid-20th century, pioneers from the Nuclear Power Institute of China (NPIC) under the China National Nuclear Corporation (CNNC) gathered to the mountain valley, which is still called by number or code name today.

After five years, on August 30, 1970, the land mode of nuclear submarines, which is 1:1 to those in the sea environment, was operated with full power in the 909 base.

However, the great work of the people in the 909 base was rarely known outside. They worked, researched and lived in a place which still "does not exist on the map."

Walking along the outside of 909 base was like a "treasure hunt." However, mysterious as the base was, the Global Times reporter spotted a real estate advertisement on the wall, like a camouflage for the base. An employee said that the salesman sneaked in and put it on. He never knew the place he had intruded.

On the day the Global Times reporter visited, the group of strangers drew the attention of the people in the 909 base, who took out smartphones and snapped photos out of curiosity and "precaution."

A beautiful handwriting shows a poem on a wall in an abandoned dormitory. "Fair southern shore, with scenes I adore ? In spring green waves grow as blue as sapphire, which I can't but admire," it reads.

After more than half a century, the main task of the CNNC has shifted from meeting the requests of national security, developing nuclear weapons and nuclear-powered devices, to developing advanced civilian-use nuclear technology and building an advanced nuclear industrial system. 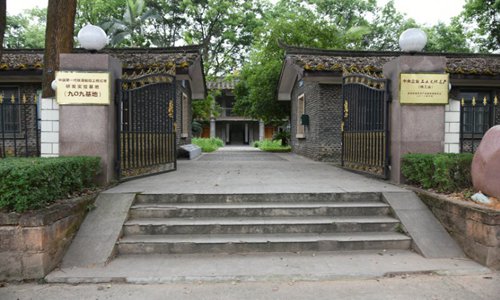 The front gate of 909 base. Photo: Zhang Haichao/GT

The core technology and key device of Hualong One shows CNNC's achievements in the past decades. Among these, the 177-fuel assembly-core is the symbol of Hualong One being totally domestically developed, which also increases by more than 5 percent the power generating capacity of reactors.

Hualong One is the most secure in the world. It utilizes a cooling safety system, double containments and earthquake-proofing technology.

The Hualong One is the world's only third-generation nuclear power project constructed as scheduled. Its cold functional tests began on April 27 on a circuit of the No. 5 nuclear power unit in Fuqing, East China's Fujian Province, to evaluate the performance of the circuit system and its supporting facilities under high-pressure conditions. The CNNC said the test started 50 days ahead of schedule.

The No. 5 nuclear power unit is expected to be put into commercial operation in 2020. Two units of Hualong One are also being installed in Pakistan's Karachi nuclear power plant.

Aside from the third generation of nuclear power, the fourth one is being developed and has made breakthrough. When asked if the nuclear power technology will be used on China's spacecraft, experts said that "we will have what other countries have!"

Aside from the nuclear submarine and Hualong One, the CNNC is also developing the "Artificial Sun" project with the help of the Southwestern Institute of Physics in Southwest China's Sichuan Province.

The project uses the nuclear fusion principle, like the H-bomb. However, unlike the H-bomb releasing uncontrollable power in one second, scientists now need to achieve controllable fusion and a sustained release of power, like the sun, that provides energy. 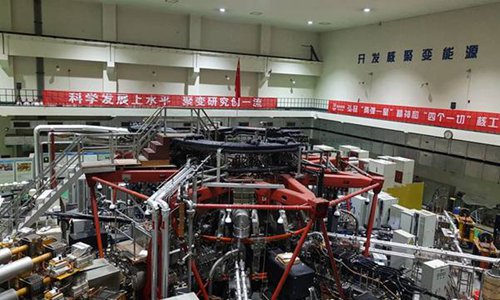 Once the controlled nuclear fusion is commercially used, it could provide the ultimate energy for the mankind to use for tens of billions of years.

However, the technology is extremely difficult. The HL-2A Tokamak in the Southwestern Institute of Physics, built in 2002, is the scientific platform for the project.

The HL-2M Tokamak, a more advanced Chinese-designed "artificial sun" and a device to harness energy from fusion, will be completed this year. The electric current of the HL-2M Tokamak will be upgraded to 3 trillion amperes, which will further improve China's research ability on controlled nuclear fusion technology.

The Global Times reporter learned that the controlled nuclear fusion research began in 1958 in China. It shows that China has had a long-term strategy and top-level design to develop nuclear technology. It is not designed for only the military purpose.