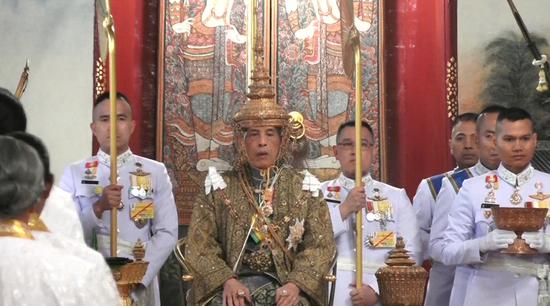 Thailand's King Maha Vajiralongkorn is crowned during his coronation in Bangkok, Thailand, May 4, 2019 in this still image taken from TV footage. (Photo/Agencies)

On behalf of the Chinese government and people, and in his own name, Xi expressed in a message sincere congratulations and good wishes to the king and the Thai people.

The king is an old friend of the Chinese people and has been attending to and supporting the cause of friendship between the two countries for long, Xi said in the message.

"I attach great importance to the development of China-Thailand relations and stand ready to make joint efforts with you to carry forward the traditional China-Thailand friendship, deepen cooperation in building the Belt and Road jointly, and push forward the comprehensive strategic cooperative partnership between the two countries to make bigger headway," Xi said.

The Chinese president wished the Kingdom of Thailand flourishing and prosperity, and the people happiness and good health.